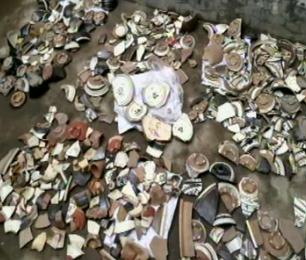 A group of ancient kilns have recently been discovered in the town of Shen Hou in Henan province. The find is unusual in that there are 15 kilns in total, all part of the famous Jun kiln. A popular saying goes “being a millionare is not as good as owning a piece of porcelain from the Jun kiln”.

An accidental discovery during the construciton of a shopping mall. The kilns were found in the town of Shen Hou, the headquarters of the Jun kiln, long hailed for the quality of its porcelain.

Spanning an area of more than 2,000 square meters, the 15 kilns unearthed were found with many pieces of porcelain contained within them or nearby.

Geng Baochang, Researcher of Palace Museum, said, “Normally we have two or three kilns discovered at the same time. A group of six kilns found in Xing kiln we thought was amazing. But this time, there are 15. Because they were buried very deep, they have been well preserved.”

The earliest porcelain produced in China was blue or white, but porcelain from the Jun kilns, which saw its inception in the Tang dynasty, some 1300 years ago, and its peak during the Song dynasty 1000 years ago, broke the trend by producing porcelain in a variety of colours. Experts are still unsure if the discovered kilns belonged to a royal court or to local artisans.

“The porcelain fragments from the kilns date from the northern Jin dynasty, to the Yuan dynasty. There is also white porcelain with black patterns. It’s said in historical records that during the early Ming dynasty, Emperor Xuande commissioned this kind of porcelain from the Jun kiln. But we cannot say for sure.” Geng said.

The Jun kilns are named after Jun Tai, in Yuzhou, which used to be the capital of the ancient Xia dyansty. In 1101, kilns here were named royal kilns because of their quality. The newly found kiln group in Shen Hou, also a part of Yuzhou, is expected to help unveil more mysteries related to the legendary Jun kilns.