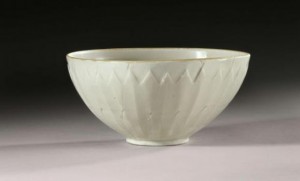 A rare Chinese bowl bought for about $3 from a yard sale in the U.S. sold for $2.2 million at an auction in New York on Tuesday.

The bowl, found in New York state, “was bought for a few dollars from a tag sale near the consignor’s home in the summer of 2007,” said Cecilia Leung of Sotheby’s. “At the time, the purchaser had no idea that they had happened upon a 1,000-year-old treasure.”

The previous owner displayed the bowl in their living room for several years before they became curious about its origins and had it assessed, Leung said. Sotheby’s pre-sale estimates valued the bowl, which measures just five inches in diameter, at between $200,000 to $300,000.

The ‘Ding’ bowl is an example of Northern Song Dynasty pottery and described by Sotheby’s as “remarkable and exceptionally beautiful.”

The only other known bowl of the same size, form and almost identical decoration has been in the collection of the British Museum in London for over 60 years, according to Sotheby’s.

The bowl was purchased by London dealer, Giuseppe Eskenazi, for $2,225,000, after a prolonged battle between four bidders

This might give you a reason to bypass the mall and head for the nearest yard sale.