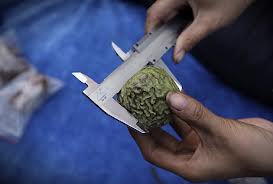 With more traditional investments like stocks and property offering only small, or sometimes negative, returns over the last few years, a market in so-called “cultural playthings” has sprouted up, sending prices for large walnuts, for instance, into the tens of thousands of dollars.

Once the toys of China’s imperial court, the walnuts which when rotated in one’s palm are thought to stimulate blood circulation are making a comeback among the wealthy, some of whom see them as not only a place to put their cash, but as a distinctly Chinese status symbol.

The bigger, older and more symmetrical, the better, says collector Kou Baojun in Beijing, who owns over 30 pairs of walnuts, most of which are over a century old and have taken on a reddish shine from years of polishing in the palm.

“Look how well these have aged. Playing with these kinds of walnuts isn’t for ordinary people,” Kou said.

Interest from collectors like Kou has made walnuts big business for merchants like Hu Zhenyuan, who buys entire trees from farmers ahead of the harvest to supply his shop in Beijing.

The walnut craze peaked in 2010, as Beijing’s steps to put the brakes on property market speculation left few places for the wealthy to park their money.

But with the stock market now down by nearly 40 percent over the past three years and few options for investing overseas, the market for walnuts and other trinkets, such as gourds to house crickets, continues to thrive. One pair for sale on a popular walnut trading website is listed at over $31,000.

And walnuts are not alone.

In 2006, a frenzy of speculation drove up the price of pu’er tea, a fermented variety from southwestern Yunnan province, to astronomical levels. In 2009, garlic prices soared as punters moved on to more pungent ground.

More recently, there has been a surge of interest in traditional mahogany furniture.

“There are a lot of people in China with disposable savings who at the moment have very poor investment options,” said Mark Williams, an economist with Capital Economics in London.

“They look at the property market where there are concerns about prices. The equity market has gone nowhere for years. Bank deposits don’t do anything for you. That fuels this speculative activity.”

China’s securities regulator is trying to change that, seeking to entice investors back to the stock market by cracking down on insider trading and other wrongdoing, cutting trading transaction fees and pushing companies to pay out higher dividends so that investors can expect more regular returns.

Many analysts say that winning them over will take time, as many lost large sums of money in past market slumps and remain sceptical about whether the stock market is stacked against individual investors and even whether the fund managers they entrust their money to act in their best interests. 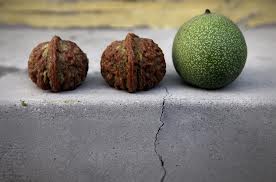 Chi Rui, who set up a walnut information website nearly 10 years ago, suspects that Beijing actually doesn’t mind money going into products like walnuts because that way it at least does not drive up food prices, as the recent garlic bubble did.

“The government has been hoping for more money to flow into traditional collectables because their price rise doesn’t affect politics or normal people’s lives,” Chi said.