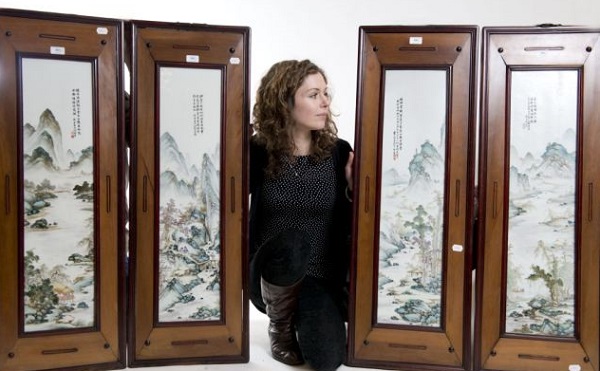 Examples of highly-prized Chinese art valued at £300 after they were found strewn around an elderly man’s bungalow have sold at auction for £516,600.

The four antique decorative panels belonged to a widower whose father brought them back from his travels to the Far East in the 1960s.

After the pensioner recently moved into a care home, his son and daughter invited valuer Richard Bromell to inspect some items in his modest chalet bungalow.

Mr Bromell found one of the floral paintings on porcelain hung on a wall behind a door, another hanging on the landing and the remaining two in bubble wrap under the bed.

When put together the panel pieces depict the four seasons in mountainous scenes.

Mr Bromell researched the 3.5ft tall items and spoke to several Chinese dealers about them but received little interest.

He first suspected the works might be more significant than he first thought when a dealer offered him £10,000 to buy them outright.

Mr Bromell’s auction rooms were packed out for the sale and ten telephone lines were booked up by overseas bidders.

And after some serious bidding, the pieces sold for £420,000. With all the fees added on the overall price paid by the anonymous Chinese buyer, who bid over the phone was £516,600.

Despite the huge price and level of interest in them, Mr Bromell is still none the wiser as to their origin but suspects they are a lot older than he first thought.

‘I take great pride in getting my prices right but my sniff-detector with these was off the scent,’ said Mr Bromell of Charterhouse Auctioneers of Sherborne, Dorset.

‘They didn’t have much aesthetic appeal and I couldn’t get a lot of interest in them when I spoke to people in the trade.

‘There was a specialist ceramics dealer at the auction and he stopped at £3,000.

‘The bidding stopped at £420,000 and they were bought by a telephone bidder from Shanghai. Naturally we were absolutely delighted.

‘I telephoned the client and she had forgotten all about the sale. I told her that I had some good news. Her brother was with her and there was a moment of silence followed by lots of laughter.

‘It is their father’s money at the end of the day so I’m not sure what is going to happen to it.’

The panel paintings were bought by the pensioner’s father when he visited Hong Kong more than 50 years ago.

They were passed down to his son who lived in a bungalow in Dorset until he moved into a nursing home.

Mr Bromell said: ‘The clients were selling the property and asked me to have a look at some bits and pieces inside.

‘I found two of the panels in bubble wrap under the bed, one was hung up behind a door and one was hung on the upstairs landing.

‘They were delicate porcelain panels and if one had fallen off the wall that would have been it.

‘I asked the clients about the history and I thought they dated to the 1960s which was consistent with what they told me.

‘But it looks like they are much older than that judging by how much they sold for.’