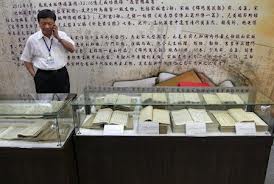 TAIPEI, Taiwan (AP) – An 800-year-old Chinese encyclopaedia is on display at a book fair in Taipei. The rare publication was recently purchased by a Chinese publishing house for US$33 million (S$40.5 million) at an auction in Beijing.

The 40-volume, 2,000-page book by an unknown Song dynasty author covers a wide range of fields, from noted paintings and literary works to plants and animals of the times.

Its title translates roughly as Valley Of A Million Flowers. It was among the precious book collections of the Qing dynasty’s Ku Wenbin, whose storage pavilion in China’s Jiangsu province survived the many wars and devastating fires of imperial and modern China.

The well-preserved book is among thousands of Chinese books and historical documents being shown at the four-day book fair that opened on Thursday in Taipei.