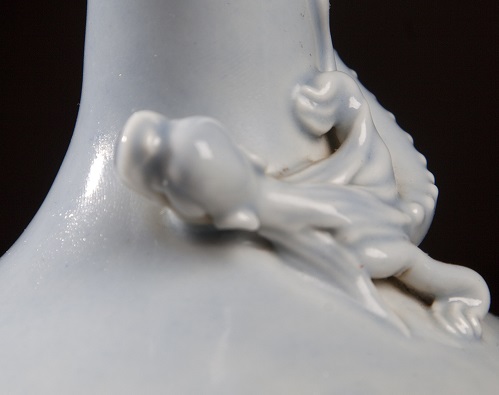 The compressed globular body is surmounted by a slender neck, and is applied on the shoulder and lower neck with a chilong dragon, the vase covered in a pale Clair De Lune glaze. Apocryphal Qianlong seal mark, Guangxu Period.

Clair de lune glaze has a very low cobalt content, roughly 1% and is fired at a high temprature. The Chinese call this tian lan you, “sky after the rain”. Throughout the Qing dynasty the clour was used on various objects. The paler the hue the better.

The soft, gentle hue of clair-de-lune is one of the most treasured Qing glazes, and was reserved exclusively for Imperial porcelains during the 18thc. Clair-de-lune-glazed wares were made in the same eight classic shapes for the writing table, ba da ma, or ‘Eight Great Numbers’, as peachbloom-glazed wares.