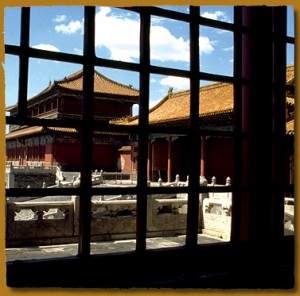 Did the Chinese really invent gunpowder?

Yes, although the exact date is uncertain. Most scholars place this event in the ninth century A.D. Originally, gunpowder was used for launching rockets and fireworks. By the twelfth century, it was being used for cannons. Gunpowder was only one of a great many technological innovations that came from China, along with paper, the compass, and movable-type printing.

When was the Great Wall built?

Although sections of defensive walls had been built in the seventh century B.C., it was in 214 B.C. that the first Chinese Emperor commanded that these sections be unified into what would become the Great Wall of China. After the Qing dynasty came to power in the eighteenth century expansion of the wall was discontinued. Today, several sections have been renovated and are a world heritage site.

What is a dynasty?

A dynasty is a succession of rulers who share the same ancestor. Beginning in the third century B.C., and up through the early twentieth century, China had a total of twelve major dynastic periods.

Who were the Qing rulers?

The Qing (pronounced “ching”) emperors were Manchus from the northeast corner of China who took control of Beijing in 1644, and ruled until 1911, when the imperial era ended. They replaced the Ming dynasty which had also ruled for about three hundred years.

Where is Beijing, and where is the Forbidden City?

Beijing is in the northern part of China, about 100 miles from the coast. (See the map.) Although China, at different points in its history, had various capital cities (and sometimes more than one capital city at a time) Beijing, since the 12th century, was the chief of these capital cities, and was the location of the Forbidden City. The Forbidden city lies at the heart of Beijing, at the intersection of the city’s north-south and east-west axes.

Why was the Forbidden City forbidden, and to whom?

One of the explanations for this name is that only those on official imperial business could enter the palace complex. However, although entrance was forbidden to the common people, many did have access to it. In addition to the court officials who worked in the palace offices, during Qianlong’s reign a regular staff of tens of thousands worked there, including eunuchs, maids, cooks, laborers, and artisans. Such a large staff was needed to attend to the daily needs of the palace. A 178-acre complex comprising over 9,000 rooms, the Forbidden City once held the residences of the imperial family, government offices, ceremonial halls, storehouses, treasuries, and the facilities needed to support the imperial household, such as workshops, stables, kitchens, and gardens. Today the Forbidden City stands as the Palace Museum.

What is a eunuch?

In the Imperial Chinese court, eunuchs were male servants who had voluntarily been castrated. Castration was partly a way of ensuring the purity of the royal bloodlines, as eunuchs were the only males normally permitted in the residential areas of the palace compound at night. Eunuchs served a wide range of roles, from menial servants and errand-boys to advisory positions to the emperor that held great power and authority.

Did the Manchu empresses have bound feet?

No. In fact, Manchu women were forbidden to have their feet bound, as this was perceived to be a cultural practice of the Han Chinese—the majority ethnic group to which the previous dynasty, the Ming, had belonged.

How many wives and children did the emperor have?

Over his lifetime, Qianlong had forty recorded wives, or consorts, and twenty-six children. Each wife was assigned a rank, or level, by the emperor, and could be promoted, or demoted, in rank only by him. A wife’s rank carried with it very specific rules for the kind of life she would lead at court, and determined everything from the number of pearls that could appear on her hat, to the amount and type of food she was served. The highest ranking person in imperial China was the mother of the emperor, known as the dowager empress.

Was Qianlong the last emperor?

The Forbidden City, completed in 1421, was designated in 1925 as The Palace Museum. Today, it holds much of the cultural heritage of China, including over one million artifacts, and is a Unesco World Heritage Site.