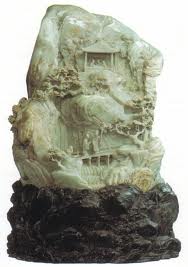 Some scholars have suggested that Chinese civilization was built around jade. Known as the “Stone of Heaven,” it was more valuable than gold or gems in imperial China and was considered a bridge between heaven and earth. Prized for both its beauty and symbolic value, jade has traditionally been worn as talisman by Chinese and shaped into a variety of objects.

Jade comes in two forms: nephrite and jadeite, both of which are prized for their hardness, firmness and ability to be carved and the luster they generate that creates an appearance of transparency. Nephrite and jadeite are two chemically different and distinct materials. Both are technically rocks not gems, since they are mineral aggregates rather than crystals. Natural stones passed off as jade include chrysoprase, jasper, serpentine and soapstone.

Revered for its hardness and texture, jade symbolizes the cosmos, wealth, political power, security, good health and strength. In China, jade cicadas have been placed on the tongue of the dead to speed resurrection; jade pigs symbolize prosperity, jade disks represent heaven and a piece of jade enclosed within a square signifies the earth.

Most jade has a bright green color associated with jade jewelry, though it comes in a host of other colors such as white, black, yellow, red, blue, and lavender depending on the chemical composition of the stone. Variations of iron content in jadeite can produce brownish-red, dark green or lavender hues. White translucent jade is highly prized.

Green jadeite gets its green color from the element chromium. The most prized jadeite is translucent, emerald green jade known as “Imperial jade.” Devious sellers can dye jade a richer color of green by heating it slowly to 212̊F and soaking it in chromium salts for two hours. The dye penetrates the cracks between the jade crystals and buyers are easily fooled. Good “dye jobs” are hard to detect. With bad ones the color seems to ‘float’ on the surface of the stone, indicating the dye has not penetrated deeply.

In the Neolithic period (5000-2000 B.C.), priests and military men used jade pieces in the worship of deities and ancestors. The most common ornaments round pi discs and square ts’ung tubes symbolized the round heaven and the square earth. Jade ornaments in ancient China were used as authority objects and emblems of power.

Ancient Chinese believed that their ancestors originated with God and communicated through supernatural beings and symbols, whose images were placed on jade ornaments. Ancient shaman most likely used jade ornaments with divine markings to command mystical forces and communicate with gods and ancestors. Jade was also used in ancient burial ceremonies.

In ancient times jade was wedged or cracked from a stone and most likely shaped by artisans using grind stones. Metal tools had not yet been invented. It took a considerable amount of time to shape, polish and engrave the elaborate pieces displayed in museums. Most are though to have been created for royalty or nobility.

During the Shang and Zhou dynasties jade objects were important objects in ceremonies and rituals. In the Western Zhou period (1100-700 B.C.) the type and number of circular jades used in ceremonies represented a person’s social status. Circular jades from this period were often cut into symmetrical pieces to form sets of two or three pieces.

Circular jades made during the Spring and Autumn and Warring States period (722-221 B.C.) were smaller than those from the Shang and early Zhou periods. They contained carved images of curling chih dragons, grain seeds, and cloud patterns. During this period circular jades were commonly worn by people. Materials other than jade, such as agate and glass were used to make “jade” ornaments.

During the Han Dynasty (206 B.C.-220 A.D.), the imperial family held jade in great esteem. While alive they wore jade pendants and ingested jade powder. When they died were covered and stuffed with jade. Banners and tomb tiles were imprinted the round pi disk, which was believed to assist the deceased reach the next world quicker.

The greatest expressions of the quest for immortality were the jade suits that appeared around the 2nd century B.C. About 40 of these jade suits have been unearthed. The jade suit of the 2nd century B.C. Prince Liu Sheng unearthed near Chengdu, Sichuan province was made of 2,498 jade plates sewn together with silk and gold wire. Liu Shen was buried with his consort who was equally well clad in a jade suit. Sufficient room was made for the prince’s pot belly.

Jade Pieces from the Tang and Sung Dynasties

During the Six Dynasties and Tang Dynasty, jade artistry went into a period of decline. Stones similar to jade but not jade itself were used in ceremonies. The only jade artifacts from this period that have survived are items like combs, belt plaques, hairpins and pendants.

From the Sung and Ming dynasties onward, jade artistry recovered its former grandeur thanks mainly to the emperors, who used jade in official ceremonies, and scholars, who had studied the importance of jade in Shang and Zhou dynasty rituals.

The imperial family and the scholar class prized jade objects that were both beautiful and practical. Jade was fashioned into flowers, birds, people, landscapes and other subjects that were also featured in painting and poetry. Artist tried to craft pieces that incorporated the natural shape of jade stones, which were usually river pebbles. The resulting shapes had auspicious meanings.

Jade Pieces from the Qing Dynasty

Jade pieces from the Qing imperial court were characterized by their impressive size, neatness and symmetry. Common motifs included dragons, emblems of the emperor, various auspicious symbols, and imperial inscriptions and marks. These jade pieces were often put on sandalwood pedestals or kept in special cases and boxes.

During the early Qing Dynasty, jade from Xianjiang was carved into elaborate floral designs, shallow reliefs the thickness of paper and ornaments inlaid with colored glass or gold and silver thread.

Jadeite carving really took off in China under the Qianlong Emperor (1736-96) who preferred the varied translucent colors of jadeite to the opaque “chicken bone” jade and “mutton-fat” nephrite that was prized before him. Jadeite from the Yunnan Province and northern Burma was imported into China in large quantities in the 19th century and became prized above all other kinds of jade.

To determine the value of the jade a small “window” is cut into the skin of the boulder. Buyers use flashlights and spotlights to try and determine the depth and translucence of the color. One buyer told Smithsonian magazine, “Even the best appraiser can see only 70 percent of the value of the stones. He can see the quality of color but not quantity of the color.” Another buyer, with 21 years experience, said, “You need a good memory, because you must study every piece you buy and remember how the crust of the rough looked, and the color distribution when it was cut. Then, if you see a similar stone, you apply that knowledge. I often recall a stone I saw ten years ago.”

In many places jade is still changed hands using an ancient Chinese ritual to keep the bidding price secret in which the buyer holds the jade he is bidding for in one hand and holds hands with the seller underneath a cloth with his other hand. The buyer only speaks the words for “hundred” or “thousand” and makes a signal with his hand under the cloth to express a number between one and ten. If a buyer extends two fingers under the cloth, for example, and shouts “thousand” he is making a bid for “2000.”