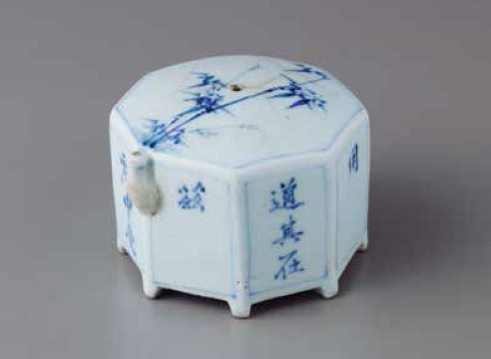 Joseon scholars used water droppers like this one in their study rooms (sarang-bang) to drip water to dilute ink or to moisten ink sticks before grinding them. This example is decorated with images of bamboo, one of a group of plants known as the Four Gentlemen (sa-gun-ja).

These plants—bamboo, plum blossom, orchid, and chrysanthemum— were so named because each was thought to display the ideal characteristics of a scholarly gentleman, such as fidelity and integrity. The plum blossom represents winter; the orchid represents spring; the bamboo represents summer; and the chrysanthemum represents autumn. Each plant demonstrates its own character to flourish in each season’s challenges.

All four plants were widely used to decorate sarang-bang furniture and objects, and they often appear in paintings and on porcelain wares. Written in Chinese characters on the sides of the dropper is a humorous poem about how the dropper was used.