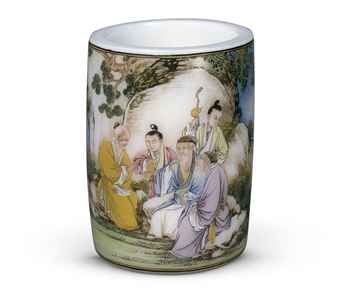 The cylindrical exterior is exquisitely enamelled with two elderly scholars, assisted by an attendant, in examination of a landscape painting. Two further assistants stand beside a European gentleman adorned with a black cap and dressed in a Chinese scholar’s long mauve-coloured robe. This particular gentleman is pointing as if in communication with an elderly sage. All amidst a continuous landscape detailed with craggy rocks and a verdant ground within a single gilt line above the base and below the mouth rim. The flat base is incised with the reign mark. 2 3/8 in. (6.1 cm.) high, wood stand. Estimate HK$6,000,000 – HK$8,000,000

This exceptional brush pot belongs to a very rare group of vessels – all of relatively small size – which were decorated with exquisite delicacy by master glass painters. They are all made of translucent white glass, reminiscent of white jade, and are painted making full use of the expanded palette of enamel colours developed in the early part of the 18th century. The painting itself is not only beautifully composed, but is executed with a sure hand, a fine brush, and an astonishing attention to detail.

They are the products of the 18th century when imperial Chinese glass reached its apogee. This was due in considerable measure to the establishment by the Kangxi Emperor (1662-1722) of the Imperial Glassworks. Like other workshops, established on the orders of the Kangxi Emperor, to manufacture, repair and maintain articles for use in the imperial household, the Glassworks came under the administration of the Zaobanchu, the Department of Palace Supply, within the Imperial Household Department. The latter, which managed the day-to-day affairs of the court and the palace, was in fact the largest Qing dynasty central governmental organisation. The major parts of the Zaobanchu Imperial Workshops or ateliers, were originally set up in the Yangxin dian (Hall of Mental Cultivation), and even though many of them moved to the Cining gong (Palace of Benevolence and Tranquillity) in 1691 the phrase ‘Zaobanchu of the Yangxin dian’ continued to be used.

Critical to the establishment of the Imperial Glassworks was a German Jesuit missionary by the name of Father Kilian Stumpf (1655-1720), whose Chinese name was Ji Li’an. Stumpf was born in Wurzburg in Bavaria in 1655. He entered a parish monastery in 1673 and was ordained as a priest in 1683. He served as a parish priest in the Black Forest, specifically in Spessart and Steigerwald. Significantly, the area of Spessart had more than 50 glass workshops in production, and it must have been during his time there that Stumpf learned the technology of glass making. Kilian Stumpf sailed for China in 1691, arriving in Macau in 1694. There he was asked to restore the lenses of some optical instruments, which had deteriorated during the sea voyage. His skill in this regard was noted by local officials, who in turn reported it to the emperor. As a result, in 1695 Stumpf was summoned to Beijing, where he stayed in the quarters of the French missionaries at the recently erected church in Canchiko, near the Xi’an Gate, inside the Imperial City. In 1696, the 35th year of the Kangxi reign, the emperor commanded that a glass workshop be built, and Kilian Stumpf was installed as Director. Wu Changyuan’s Chenyuan shilue (A Brief Introduction to the Imperial City) notes glass being made near the church in Canchikou.

It is significant to note that in a letter of 31st October 1696 the French Jesuit Jean de Fortaney (1643-1710) wrote: ‘The Emperor is making a beautiful glassworks next to our house in a large piece of land that he will give us if we take charge of it.’ Fortaney goes on to say that: ‘Father Kilian Stumpf is the reason for this. I am asking you to send us immediately one or two good workmen drawn from our own good glassworks, who will enable us to make glass and crystal like ours, and even mirror glazes. Send also a good enameller.’ (Emily B. Curtis, ‘Qing Glassmaking – The Jesuit Workshop on Canchikou’, Luster of Autumn Water – Glass of the Qing Imperial Workshop, Beijing, 2005, p. 95). It would seem that even at this early date the emperor was interested in fine enamelled glass. The Kangxi Emperor consented to two lay brothers, possibly those requested by Fortenay in 1696, entering the glassworks in order to train in glass making for a period of three years. Chinese glass workers were also employed at the Imperial Glass Workshops. These would have come from China’s two well-established centres of glass production – Boshan, in Shandong province, where glass had been produced at least since the Yuan dynasty (1279-1368) and Guangdong. Two of the Guangdong glass craftsmen working in the Imperial Glassworks during the Kangxi reign are named in palace archives. These were Cheng Xianggui and his family apprentice Zhou Jun, who appear to have taken up their posts in 1709 and were sent back to Guangdong in 1715 (Peter Y.K. Lam ‘Three Studies on the Glasshouse of the Qing Imprial Household Department’, Luster of Autumn Water – Glass of the Qing Imperial Workshop, Beijing, 2005, p. 64).

Two other European Jesuits are recorded as making significant contributions to the Imperial Glassworks. The first of these was the French Jesuit Gabriel-Leonard de Brossard (1703-1758), whose Chinese name was Ji Wen, and who came to China in 1740. Before entering a monastery he had been trained as a lapidary working on glass and crystal, and the skills he brought to China were those of a clocksmith and glass worker. The Qianlong Emperor commanded that he work in the Imperial Glassworks in the Yuanming Yuan, where he specialised in producing different glass colours and textures, and in making glass in European style, as well as highly ornamental glass for use and display in the palace. The other noted Jesuit glass worker was also from France. This was Pierre d’Incarville (1706-57), whose Chinese name was Tang Zhizhong, who was born in Rouen. He entered a monastery in Paris in 1727, journeyed to Canada in 1730, and returned to France in 1735, before setting out for China in 1740. He was skilled at making plate glass, having worked in a glass workshop in Rouen – possibly the Royal Glassworks. After his arrival in China in 1741 he worked in the Imperial Glassworks in Canchikou for at least two years.

It was in the Yongzheng reign that an imperial command was issued to move the glassworks to the Yuanming Yuan, where it would become part of the Liusuo (six workshops). Nevertheless, the glassworks at Canchiko did not cease production, and only began to decline later in the Qianlong reign (1736-95), after 1758. Scholars have speculated that in the Qianlong reign, the bolichang(glass factory) mentioned in the records was the original glassworks at Canchiko, which fired and blew the glass, and supplied blanks for decoration by the bolizuo (glass workshop) in the Yuanming Yuan, which would have been involved in the production of highly refined pieces, under the close supervision of the emperor. (For further discussion see Peter Y.K. Lam, ‘Three Studies on the Glasshouse of the Qing Imperial Household Department’, Luster of Autumn Water – Glass of the Qing Imperial Workshop, op. cit., p. 68.) It seems almost certain that the current refined glass brush pot and the small number of surviving related glass vessels were decorated in the bolizuo during the years of the finest Qianlong glass production between 1736 and 1758.

It is interesting to compare the current glass brush pot to a small group of enamelled glass vessels in the collection of Sir Percival David (AD 1892-1964). Two small glass cups were, like the current brush pot, formerly in the Hippesley Collection, indeed they appear immediately after the brush pot in the Hippesley catalogue, being numbered 326 and 327, while the brush pot was 325. Both cups are illustrated in Illustrated Catalogue of Qing Enamelled Wares in the Percival David Foundation of Chinese Art, London, Revised Edition 1991, p. 32, nos. 850 and 851. A small enamelled glass ovoid water pot in the David Collection is, like the two cups, decorated with a delicate landscape. The David Collection also includes a small enamelled glass vase, one of two loaned by Sir Percival David to the 1935-6 International Exhibition of Chinese Art, decorated with rocks and flowers (illustrated by R. Scott in Percival David Foundation of Chinese Art – A Guide to the Collection, London, 1989, p. 110, pl. 114).

Of particular interest for comparison with the current brush pot is another enamelled glass brush pot in the David Collection (illustrated ibid.), which was formerly in the Ezekiel Collection and was also included in the 1935-6 International Exhibition of Chinese Art, as exhibit no. 2210. Like the current vessel the David brush pot also depicts scholars in landscape with trees and rocks. Like the painter of the current brush pot, the painter of the David vessel also demonstrated a keen understanding of chiaroscuro, which manifests itself especially in the shading of the robes and faces of the figures. While the two brush pots do not appear to be painted by the same hand, they do show every sign of having been decorated in the same atelier. It may also be noted that, like the current brush pot, all the David enamelled glass vessels have wheel-cut four-character Qianlong marks inside double squares, some of which show the remains of blue enamel have been inlaid in the incisions.

While the painting on the David Collection brush pot is very fine, it is probably fair to say that the painting on the current brush pot is even finer, with even greater attention to detail and even more subtle use of the enamel palette. Although the vessel is only 6.1 cm. high, the hanging scroll being examined by two of the scholars is realistically shown to be a classical landscape ink painting, with enough detail to allow speculation that it may have been intended to represent the work of the Yuan artist Ni Zan. Small details, such as the jade ornament on the belt of the purple clad figure, or the reed hat of the small boy carrying a fishing rod, are exquisitely rendered, while the multi-coloured rocks are a tour-de-force. This brush pot was made to be examined closely by a connoisseur who would appreciate the consummate skill of the artist who created it.