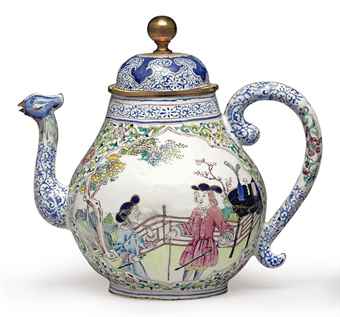 Canton enamel derives its name from the town located on the Pearl River, which was the hub of the China Trade throughout the 18th and 19th centuries. The technique was adopted by the Chinese from the French missionaries who brought the enamels over from Limoges, where such enamelled wares had been produced since the fifteenth century.

The pink colour in particular was a popular addition to the Chinese palette – and after its introduction, was the principal hue in most designs. Twice fired, most designs have a white ground on copper, whereupon further designs of figures, flowers or landscapes is applied, before the final firing secures them into place.

The medium allowed for more controlled designs as opposed to porcelain, some of the enamel pieces being extremely fine and most likely produced in the Imperial workshops in Beijing. The enamellers, already most adept with working on porcelain and cloisonné produced stunning pieces.

The quality of Canton enamels began to deteriorate at the end of the 18th century, but items were still made in large numbers during the 19th century.