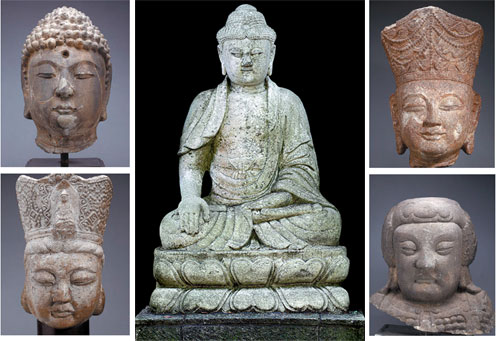 A Buddha-head collector in Taiwan has donated all his trophies to the Chinese mainland. This is the third time that such religious cultural relics are returning home. Han Bingbin traces the history.

Thirty years ago on a Taipei street known for antique sales, Andy Yeh had his epiphany moment when he saw the rain had tarnished the sacred face of a stone-carved Buddha head among the items on the roadside. It was a scene that Yeh, a Buddhist, immediately interpreted as “Buddha is suffering a catastrophe”. He bought the head, kicking off his decades-long collection of Buddha statues to “save them from suffering”.

During his visits to the Chinese mainland in the past few years, Yeh, who is the central advisory committee member of the Kuo-mintang party, has felt sad that many Buddha statues remain missing, with a majority scattered overseas. He says nothing is worse than being homeless. He decided to donate all his collections to the mainland, hoping his action would bring about the repatriation of more cultural relics.

In early 2013, Yeh’s 32 Buddha statues, consisting of 23 heads and nine complete figures, found their new home in Wuqing district of Tianjin. The oldest of them traces back to the Northern Qi Dynasty (AD 550-577), while the latest belonged to the Qing Dynasty (1644-1911).

Before Yeh chose Wuqing, he spoke to senior officials of many cities, all of whom promised a safe home for his statues. Wuqing is the only place that touched him by promising to find the hometowns of these statues, especially those Buddha heads without bodies.

A joint collaboration by archaeologists from both sides of the Straits resulted in the return of a 574-year-old white marble Buddha statue, weighing 760 kilograms, to Zhengyang county in Central China’s Henan province last July. Another 420-kg statue, from the Tang Dynasty (AD 618-907) during the reign of Empress Wu Zetian (AD 625-705), is expected to return to Hefei, capital of Anhui province, in March.

Unlike Buddha statues in grottoes, which tend to show unique artistic features, it is difficult to identify the exact root of these temple statues, especially those without inscriptions, says one of the identification experts, Jin Shen. He says archaeologists are only able to gauge the statues’ rough identity, which points to their general place and time period of origin.

As part of the homeward-bound campaign, according to Wang Lan of the Wuqing administration, they’ve been working with regional media to call upon the public for possible clues, through which they have already collected more than 200 pieces of information. Meanwhile, they have established a website, displaying the photos of the statues in the hope of gathering global responses.

These Buddha statues, like many other cultural relics, were smuggled overseas, mostly during wartime. From the late Qing Dynasty to the beginning of the Republic of China (1911-49) when the country started to suffer massive foreign intrusions, cultural relics were hauled from the country “in sacks and cars”, according to Taiwan-based historian Lin Pao-yao who participated in the identification process.

They were then bought by entrepreneurs or aristocrats, in Europe especially, who have a passion for oriental culture.

“In international auctions, foreign buyers usually care more about the appearances of Buddha statues. To them, the historical value doesn’t seem to matter as much as it does to us,” says Lin.

Lin adds that’s why Buddha statues made in the Tang and Song (960-1279) dynasties, which display a style of realistic art favored by Westerners, tend to be treated as the highlights of their collections. Buddha statues of the Northern Qi Dynasty have been also gaining more recognition and interest worldwide over the past few decades because they were arguably influenced by the art of the Gupta Empire (a phase of ancient India), which entered what is today’s Shandong province through the Maritime Silk Road.

“From 1949 to the ‘cultural revolution’ (1966-76), the Chinese mainland cut off its connection with the outside world. Unable to enter the country, the second or third generations of those collectors don’t have the emotional attachment to the country, unlike their fathers,” says Lin.

Lin says that’s also the reason why they’re willing to sell their family collections in the first place. From the 1970s, antique dealers started to find treasures from their gardens and sell them to international markets.

In the 1980s, Taiwan started to embrace a fast-growing economy and a more open society, both contributing to the formation of a culturally aware elite group who were willing to invest in cultural relics. That’s why when Chinese cultural relics entered the Asian market, with Hong Kong normally being the first stop, entrepreneurs from Taiwan were usually among the first group of buyers.

In the past decade, Chinese cultural relics owned by Taiwan collectors started to draw attention in markets including the Chinese mainland.

Taiwan has been an important source of cultural relic donations to the Chinese mainland. In 1999, Taiwan entrepreneur Chen Yung-tai bought 18 arhat head sculptures from overseas and gave them back to the Zishou Temple in Shanxi province. In 2002, a Buddha head was donated to the Shentong Temple in Shandong province by Master Sheng-Yen on behalf of Taiwan’s Dharma Drum Mountain.

Yeh’s donation is the third such gift in history. In Henan’s Zhengyang county, the local government is planning to rebuild a small temple to accommodate the statue. Local residents are also returning the stone plaque they kept after the original temple was demolished.

“The return of the ancient statue to Zhengyang will not only enhance the communication across the Straits, but also stimulate local cultural tourism,” says Yeh.

“After hearing about the return of the statue, many people went to worship it. This will push the government to pay more attention to the preservation of cultural relics.”