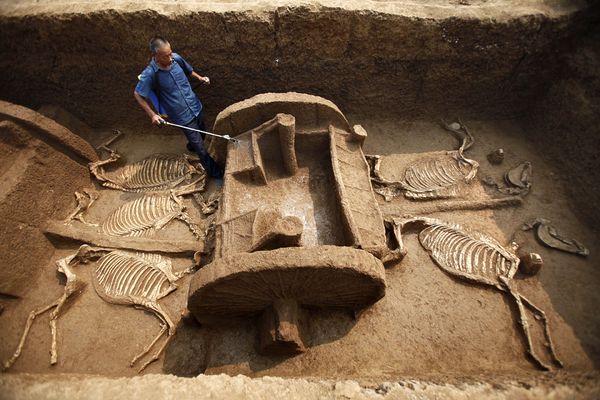 To protect it from drying out, a worker sprays water onto a millennia-old chariot recently unearthed in the city of Luoyang (map) in central China.

Overall, 5 chariots and 12 horse skeletons were found in the tomb pit, according to China’s state-sponsored Xinhua news service. Archaeologists believe the tomb was dug as part of the funeral rites of a minister or other nobleman during the Eastern Zhou dynasty period, about 2,500 years ago.

Chariots were important vehicles of war during the Zhou dynasty and were driven by nobleman-warriors wielding halberds or spears, said David Sena, a China historian at the University of Texas at Austin who was not involved in the discovery.

“During this period, there wasn’t a distinction between the military class and an educated aristocratic class,” Sena said.

“People with aristocratic backgrounds were expected to do both, and riding a chariot was one of the skills that a nobleman was expected to have.”