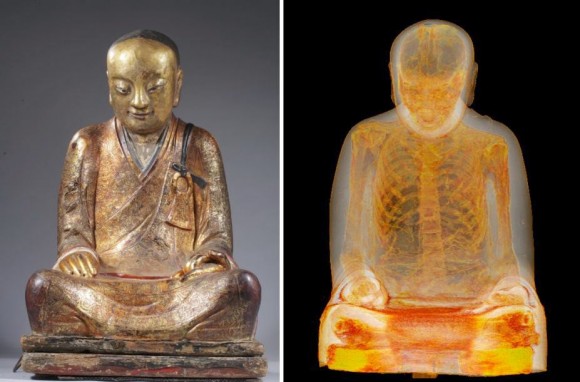 Visitors to the popular “Mummy World” exhibition at the Natural History Museum see a golden statue of a sitting Buddha, about four-foot (1.2-m) tall. On a television monitor, they can see the skeletal remains of the mummified monk inside it.

Researchers discovered the mummy, encased in a cavity in the statue, when a private buyer brought it to the netherlands for restoration.

“The Buddha statue belongs to a Dutch private collector and when he bought it, he had no idea what it was hiding inside,” said Monika Kiss-Stefan, a spokeswoman for the Budapest museum.

Monika Kiss Stefan of Hungary’s Natural History museum where the Buddha is housed, said the Dutch owner had no idea of what his statue was hiding.

“He lent it to the Dutch Assen museum for an exhibit and they put it under a CT machine, x-rayed it and discovered that the statue hides a mummy of a monk.”

The statue’s secret was revealed gradually, starting in 1997. Its owner suspected it might contain something inside and took it to Utrecht University to have it carbon-dated.

Samples were taken that found a body from the 11th century was concealed inside, Budapest museum curator Ildiko Pap said. A pillow it was sitting on was dated to 300 years later.

The mummy was found sitting on a bundle of cloth covered in Chinese inscriptions, revealing its identity as a Buddhist Monk who may have practiced “self-mummification.”

Kiss-Stefan said that while there were around 20 to 25 mummified monks around the world, the one on display was the only one known to be concealed inside a statue.

She said the monk had prepared for his death meticulously. Monks who choose self-mummification ate only seeds for a long time and then roots of a poisonous plant to prevent maggots eating their flesh, she said.

The few monks that were able to successfully complete the process were highly revered.

Researchers are still waiting on DNA analysis results in hopes to trace the mummy back to its exact location in China.