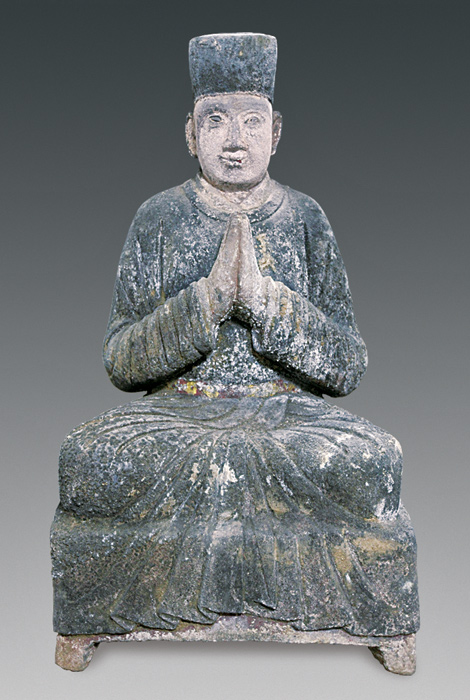 Archaeologists have discovered a 1,000-year-old tomb covered with murals in Datong City in northern China, according to the latest published edition of Chinese Cultural Relics, the official English translation of the Chinese archaeology journal “Wenwu.”

The findings are described in detail in the article entitled “The Excavation of the Mural Tomb of the Liao Dynasty at Dongfengli Neighborhood, Datong City, Shanxi Province” prepared for the publication by the team from the Datong Municipal Institute of Archeology who took part in the excavation of the tomb back in 2011.

The tomb, located not far from a modern railway station in the city, no longer has the remains of its owner when excavated.

However, a 3.1-foot statue of whom he might have been was found. If that statue was his, the tomb’s owner was depicted as a smiling pleasant-faced man sitting in a crossed-legged position on top of a raised platform with his hands touching one another as if praying or as if in greeting or welcoming guests. He was shown wearing a long black robe that also partially covers the platform.

On the other hand, according to Live Science, researchers say it is also possible that the statue acted as a substitute for a burial, in which case the owner’s remains were never really left in the tomb.

The tomb walls, ceiling and entrance were found covered in colorful murals. As described by Live Science, the entryway is flanked by two gatekeepers, a male and a female. The male is on the left and holds a staff, while the female is on the right and holds a fan. 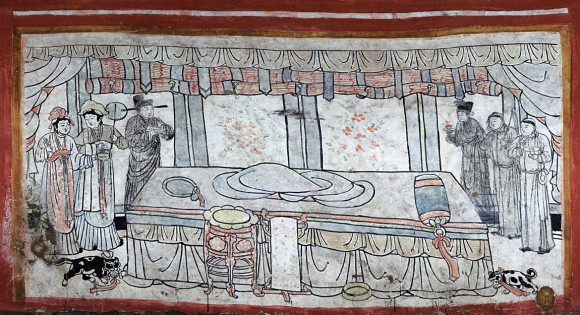 Above, there is a Garuda, a fabled humanoid bird. At the ceiling of the tomb, despite being damaged, stars painted in bright red color can be seen connected with dotted lines to form constellations. 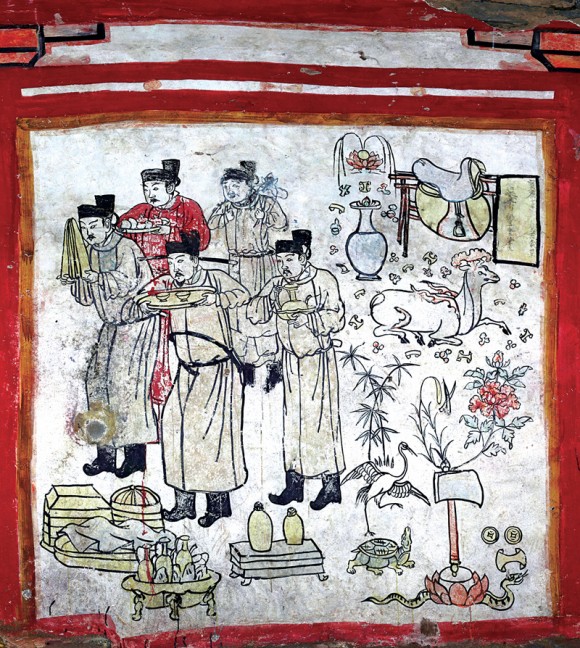 The murals on the walls depict various scenes of life during the owner’s time. On the scene depicted on the east wall, there is even a poem inscribed which in part reads: “Time tells that bamboo can endure cold weather. Live as long as the spirits of the crane and turtle.”

The walls of the tomb chamber are lime plaster covered with several large murals depicting the daily domestic life of a noble during the Liao Dynasty (also known as the Khitan Empire), which lasted from 907-1125 AD.

The Khitan people (known in Mandarin as “Qìdan”) were normadic people from Mongolia and Manchuria who dominated parts of China during the Liao Dynasty and ruled over the Han Chinese. Very few relics of their reign have survived till today.

The largest mural is that of a bedroom scene, which shows a large bed in the centre of a room and a six-panelled folding panel behind it, just under blue and red curtains.

The room is attended by six male and female attendants in traditional dress bearing a variety of tools to provide their master with comfort, while a cat and a dog frolic at the foot of the bed.

Another mural depicts five middle-aged male attendants holding serving utensils, with containers and trays of fruit and wine at their feet.

Next to them, auspicious items are depicted, including a deer, a crane with a red crown, a crawling yellow turtle, flowering peonies, and an axe standing on an orange lotus flower-shaped base, carried by a green snake.

Most of the grave goods were stolen, but there remain a few pottery bowls, personal grooming items like bronze tweezers, as well as a figurine of a boy made from amber, a gilt bronze seal in the shape of a figurine, and another gilt bronze seal signet ring. 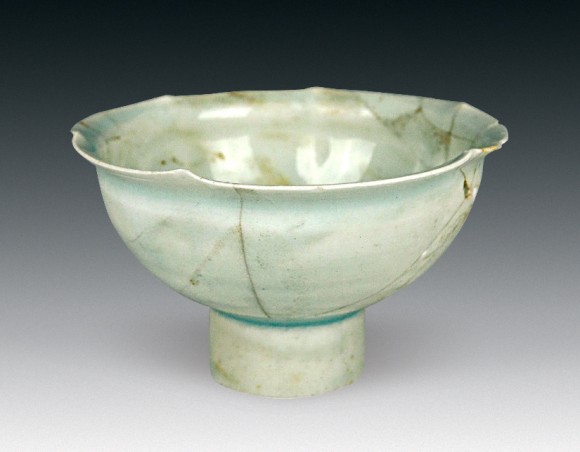