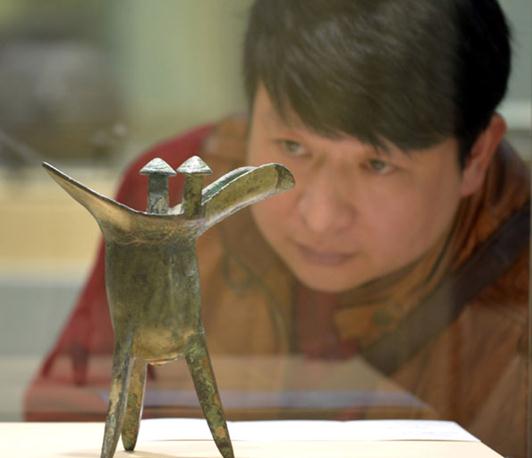 Although deals in the Chinese mainland art market shrank a little in 2014 compared to last year, the continuing strong demand for masterpieces of antique paintings and scrolls, Chinese collectors’ rise on the international stage and diversified auctions are all sustaining hope in the growth of the art market.

Sales in auction houses in China from January to September totaled 15.3 billion yuan ($2.5 billion), says Ouyang Shuying, deputy general-secretary of the China Association of Auctioneers. With autumn auctions ringing down the curtain, major houses like China Guardian and Poly that represent more than half the art market have seen an average 20-percent drop in sales.

However, experts who attended last week’s Chinese Art Market Summit say that China’s art market is “never in need of money” but is currently in need of confidence and masterpieces.

White Pagoda Hill, a set of hand scrolls by Emperor Qianlong of the Qing Dynasty (1644-1911), fetched 116 million yuan at a Poly auction on Dec 2, setting a record for Chinese paintings and calligraphy in 2014.

“It’s really hard for us to persuade collectors to sell this year,” says Dong Guoqiang, president of the Beijing Council International Auction Company. “China’s art market is still in a transitional year. But we are not short of money. Just look at China’s stock market. It achieved 1.2 trillion yuan in a single day.”

Dong laments that there are few high-quality artworks to attract good prices－meaning prices over 100 million yuan－offered by Chinese collectors this year. But that hasn’t prevented them from turning to the international market to invest in Western art.

Talking about his expensive purchase, Wang Zhongjun says the price is $10 million lower than his expectation.

“I loved it at first sight when it was on a preview in Hong Kong. I didn’t think much before my purchase. Just love it,” says Wang Zhongjun, who started painting himself in primary school.

His paintings are similar to impressionists’, and he likens his style to that of Italian artist Amedeo Modigliani. Before the Van Gogh, he has bought paintings by Monet, Cezanne and Renoir.

“I enjoy sitting on a couch and watching these masterpieces hanging on walls at my house with a cigar,” adds Wang Zhongjun, whose collection also includes Chinese paintings and sculptures.

Early this year, Liu bought a chicken cup that was used by emperors of the Ming Dynasty (1368-1644) at a Sotheby’s auction for a record price of $36.3 million. In November, he offered HK$348 million ($44.9 million) at Christie’s auction for an embroidered silk thangka.

After buying the thangka, Liu joked on his micro blog, saying “I exhausted myself to successfully win the thangka from a foreign bidder. I was so willful”. The post won him a nickname from netizens: “willful man”.

But Liu explained later, at the Chinese Art Market Summit 2014, that he bought the thangka due to his deep fondness of it.

Both purchases at such high prices have stirred some criticism from the public on the value and prices of artworks.

“It’s childish to only focus on the price of an artwork. We should spend more time understanding their priceless value,” says Liu, who established the Long Museum, a private museum in Shanghai.

Dong, of Beijing Council International Auction Company, says the culture environment should be more tolerant. It’s not fair to criticize a collector only because of his expensive purchase of masterpieces.

“We should encourage more of our collectors to buy things overseas. They have set up their own collection systems instead of buying randomly. They have started to take on an international vision,” Dong says.

To woo back Chinese collectors who have been buying overseas, domestic auction houses have actively diversified their artworks.

This year, the number of special auctions devoted to a particular category has increased sharply, such as hardwood furniture from the Ming Dynasty and antique clothes of the Ming and Qing dynasties. The auction night of China’s antique bronzeware by Xiling Yinshe Auction Company in Hangzhou, capital of Zhejiang province, was among the first of its kind in China. The antique bronzes were sold out on Saturday.

In the future, presidents of major auction houses say, they plan to invest in the online auction platform. Zhao Xu, president of China Guardian, says Ma Yun, founder of China’s leading e-commerce company Alibaba, has promised to invest more in the cooperation with China Guardian.

“This year is a little bit tough, but with the strong support from our government and from private businessmen, we’re confident of next year’s art market,” Zhao says.