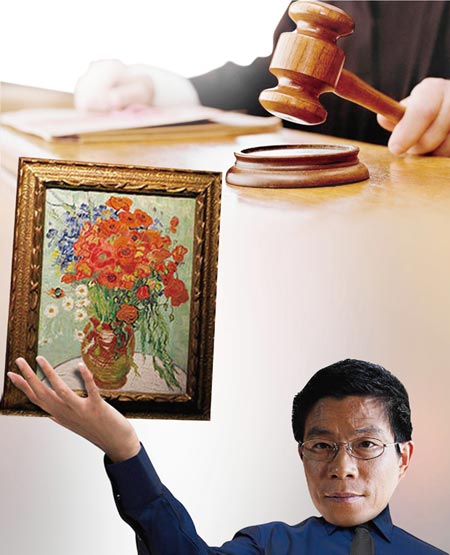 Among the most remarkable pieces is a tiny white cup decorated with poultry, purchased by prominent art collector Liu Yiqian for HK$281 million (US$36 million), a record sale for auction house Sotheby’s and the highest price charged for a Chinese porcelain artifact.

However, the 500-plus-year old “chicken cup” has reportedly been placed in a bonded art warehouse for tax evasion purposes, one unnamed industry insider said.

Valuable works of art brought to China are generally subject to customs duties and VAT, according to Hu Huanzhong, general manager of Shanghai Waigaoqiao International Culture and Art Development Company. The company is also the operator of the Shanghai International Art Trading Center, which serves as a bonded art warehouse.

Huayi Brothers Media chairman Wang Zhongjun recently bought Vincent van Gogh’s 1890 painting Still Life, Vase with Daisies and Poppies for 377 million yuan (US$61.54 million) but was asked to pay nearly 90 million yuan (US$14.69 million) in taxes if he wanted to bring it back to his home in Beijing, Hu said. The amount was calculated based on a compound tax rate of 24.02%.

China has halved the import duty rate for the third category of art pieces to 6% from 2012 but the rate is still high compared with other countries.

Due to high import taxes, Chinese art collectors usually buy artworks and store them in bonded warehouses to avoid paying, with some parking their treasures in Hong Kong in an attempt to transport them back to China after the government changes its policy, said industry expert Ding Bin.

Placing artifacts in bonded art warehouses is a great option for art collectors because through this practice they gain exemption from taxation, Hu pointed out, adding that it would save Liu nearly 40 million yuan (US$6.53 million) in taxes for his collection.