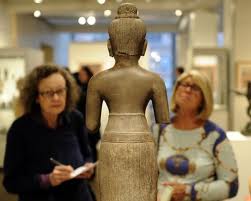 With five days of auctions offering items from Chinese ceramics to 15th-century scrolls, and combined estimated sales totals of more than $60 million (37.4 million pounds), the stakes are high for Christie’s and Sotheby’s as they gauge the Asian sector of the art market.

“Every season we see a growing number of Asian buyers at Christie’s and in the first half of this year there was a 31 percent increase in Asian clients registering to bid in our sales in London and New York,” said Jonathan Stone, Christie’s international head of Asian art who is based in Hong Kong.

The New York sales begin with Sotheby’s auction of South Asian modern and contemporary art, featuring four private American collections. It is led by a large scale work by eminent Indian painter MF Husain who died in 2011. The work, “Untitled (The Three Muses, Maya Series), is estimated to fetch up to $700,000.

The auctions conclude with Christie’s two-day sale of fine Chinese ceramics and works of art, which are expected to take in from $10 million to more than $15 million. The top item is a rare bronze ritual wine vessel from China that is more than 3,000 years old and could sell for up to $800,000.

A Ming Dynasty blue and white moon flask, which was recently discovered in a New York home when it owners saw a similar piece in a Sotheby’s advertisement is expected to sell for $600,000 to $900,000.

The week’s top lot at Christie’s is a blue and white porcelain dragon jar of the 18th-century Joseon dynasty, which could fetch about $2 million at its sale of Japanese and Korean art.

Several other pieces are estimated to sell for $600,000 to $800,000 each, such as Indian painter Tyeb Mehta’s work, “Untitled (Falling Figure),” and Park Sookeun’s “Tree and Three Figures,” offered at its sale of Japanese and Korean art.

At Sotheby’s, a more-than 10-meter long hand scroll by the Chinese artist Lan Ying, “Landscape After Wu Zhen,” has a pre-sale estimate of $1.2 million to $2.2 million, while an Imperial jade seal from the late 18th century could fetch up to $1.2 million.

Other highlights at Sotheby’s include the Weisblat collection, which it called the most important private collection of Indian art to come to auction in over a decade. Abe Weisblat, a noted collector of Indian art, once worked for the Ford Foundation and later the Council on Economic and Foreign Affairs.

Also at Sotheby’s, Chinese artist Qiu Ying’s roughly 500-year-old “Summer Reverie by the Lotus Pond” is estimated to sell for $750,000 to $1.5 million at its classical Chinese paintings sale.