Looks like the market is just being picky, not surprising considering the last few years have seen big prices for mediocre items. The buyers were very picky with lots offered by Bonhams, Sothebys seemed to fair better but both did better than Christies. 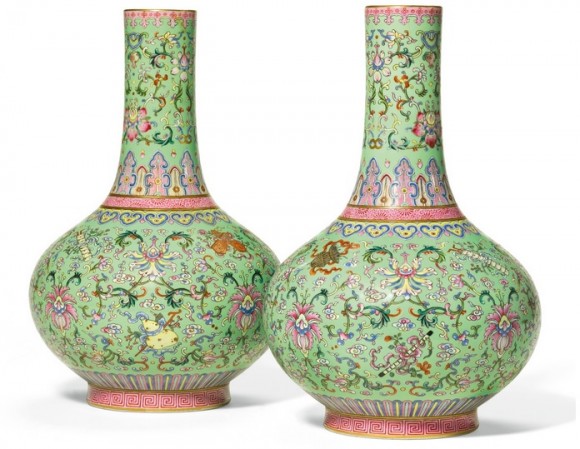 Each compressed globular body rising from a short spreading foot to a tall cylindrical neck, brightly enamelled around the body with leafy lotus strapwork and Buddhist emblems reserved on a green ground, all between lotus lappet, ruyi and stiff leaf bands at the foot and shoulder, the gilt rim encircled by a spearhead band, the interior and base glazed turquoise and inscribed with an iron-red six-character seal mark within a square cartouche reserved in white. Size: 31cm., 12¼in.

Finely potted and decorated with an intricate design of the bajixiang interspersed amongst foliate lotus blooms, these vases exemplify the Qianlong Emperor’s pursuit of innovative designs. Qianlong took an active interest in the work of various imperial manufactories in his empire, particularly the Jingdezhen imperial kilns, bringing his personal influence to steer the workshop’s artistic direction according to his taste for ornamentation. By working closely with Tang Ying, his virtuoso kiln supervisor, he encouraged potters at the imperial kilns to explore a wide range of shapes, colours and designs in their repertoire. As a result, a range of innovative wares were produced, such as these vases.

The familiar design of lotus scrolls have been injected with a hint of novelty through the inclusion of the bajixiang on a green ground, a colour that was developed in the Qianlong period and embodied contemporaneity. The leafy scrolls have been adapted to incorporate the rococo style of Western acanthus leaves, thus exuding a sense of elegant exoticism in the overall design while remaining firmly rooted in Chinese tradition.

One of Bonhams top selling lots: 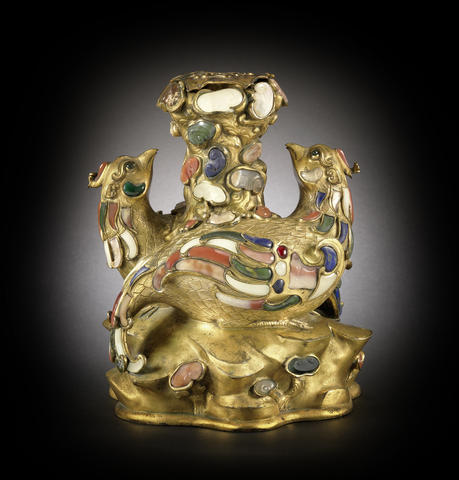 Expertly cast as two phoenix perched symmetrically on rockwork and gazing proudly up at a gnarled trunk forming the neck of the vessel, the crests, eyes, neck feathers, wings and long curling tails of the birds intricately inlaid with glass and hardstones including finely banded agate, lapis lazuli and quartz enriching the delicately incised gilt-bronze body feathers, the trunk similarly embellished with ruyi-shaped stones, the liner fitting snugly into the open mouth, and further ruyi-shaped stones issuing from branches around the rockwork base, the underside incised with a double vajra symbol.

The gilt-bronze and hardstone embellished ‘double-phoenix’ vessel is an exceptional example of Qing magnificence at its peak. It is exemplary of the sumptuous Imperial taste during the Qianlong period. It demonstrates the remarkable casting, chasing and lapidary skills achieved during this celebrated period with no expense spared in its lavish production. In form and technique it is inspired by archaic bronze inlaid vessels of the Han dynasty, thereby combining Qianlong-period craft opulence with the emperor’s call for inspiration by archaic periods and their associated respected morals. See the Qing Dynasty Compilation of Inspected Antiquities (Ning Shou Jian Gu, Xi Qing Si Jian), Vol.14, and related Qianlong period example, illustrated by The Oriental Ceramic Society of Hong Kong Ltd., Art & Imitation in China, Hong Kong, 2006, Catalogue no.25.

The mythical phoenix, considered the King of Birds, is associated with the direction South and takes the ‘female’ yin position when coupled with its counterpart in the animal kingdom, the dragon, representing the ‘male’ yang position. This symbolism is further underlined in the present lot as the original sealed base of vessel is finely engraved with a beribboned double vajra piercing four ruyi-shaped cloud scrolls encircling a central Yin and Yang medallion framed by lotus blossoms. The Buddhist engraved decoration on the base would indicate that this vessel and others similar to it may have been made as ritual vessels.

As the Emperor was symbolised by the dragon, the phoenix evolved to represent the Empress. The phoenix is said to appear only during the reigns of righteous emperors and in times of peace, therefore further symbolising peaceful and benevolent times and good fortune. The present pair of phoenix are cast standing beside a tree trunk; thus representing All under heaven, ‘tian xia’, further reinforcing the imperial context. A double phoenix multiplies this symbolism and its auspicious representations.