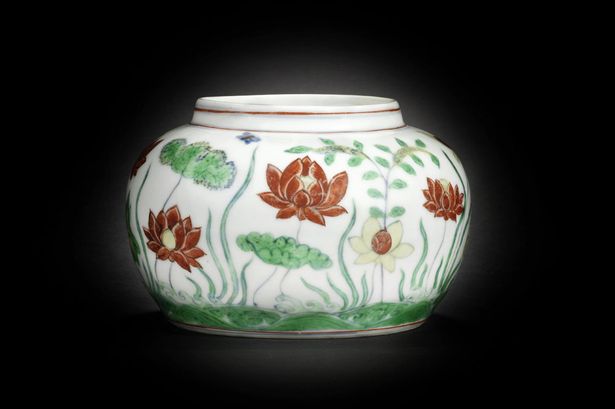 A small Chinese jar that was bought 50 years ago for a tiny sum is now expected to make its owner a millionaire.

The 6ins wide unassuming porcelain jar was brought back from the Far East by British customs officer John Richardson in the early 1900s.

After his death it was to be sold along with other antiques he owned but it was damaged by auctioneers and withdrawn from sale as a result.

It was bought privately in 1964 by the present owner for a modest sum and was repaired.

The jar, which colourfully depicts a lotus pond, was made in the 15th century and was officially approved by the Chinese Emperor Chenghua during the Ming dynasty and carries his ‘quality control’ stamp.

Experts consider this period of ceramics as the finest ever created in China, largely due to the mastering of the technique to give them two firings to provide an exceptionally clear glaze.

There are less than 600 Chenghua porcelain pieces in existence and any examples that come on the open market are highly-sought after, especially among the newly-rich Chinese who are buying back their lost heritage.

The elegantly-decorated jar has previously featured in two encyclopedias of antiques.

It is now being sold by auctioneers Bonhams and has been given a pre-sale estimate of £600,000 – but is likely to go for much more.

Asaph Hyman, of Bonhams, explained the jar was made in ‘doucai’ style, a Chinese term for contrasting colours.

He said: “It dates to the Chinese period of mid-15th century which was one of the most admired and prized periods for Chinese porcelain.

“These items were made to the highest standard for the Imperial Court between 1465 and 1488.

“Pieces of this quality are extremely rare and we know of no others like this one.”

John Richardson was an officer in the Chinese customs department in Beijing and was awarded the Peking Siege Commemoration Medal 1900 for his efforts in defending European diplomatic offices during the Boxer Rebellion.

He returned to his home at Becton House at Barton-on-Sea, Hants, with a number of Chinese ceramics which turned up for sale at an auction house in Bournemouth in 1964.

Mr Hyman said: “The jar was damaged while it was with the auctioneers and withdrawn from the sale. The current vendor bought it afterwards, he doesn’t really remember how much for but it was very little money at the time.

“He had the jar repaired and restored. He knew what it was and how rare it was and has taken good care of it.

“There is no great reason why he is selling it now other than there comes a time to pass on these things to someone else to look after.”

Colin Sheaf, head of Asian Art at Bonhams, added: “Three decades in the Chinese Art trade does not entirely prepare you for an object like this.

“When I saw it for the first time, after years of storage, it had that certain something, that charisma of the truly spectacular object which creates a frisson of excitement in anyone who knows about Chinese porcelain.

“Its very simplicity is of course part of its charm, as this reflects the ambition of all great Chinese art.”

The jar is being sold on November 6.