Sworders held an exciting Asian Art sale on Tuesday 29 April. There was much interest in several items before the auction and it was the large Zitan brush pot which led the way. Dated from around the late 18th Century, the unique hardwood pot intricately illustrated the story of ‘The Hundred Boys,’ with a charming village scene. With several phone lines booked and plenty of activity on the internet, the lot was eventually sold to a Chinese buyer for £180,000 including premium.

Late 18th/early 19th century, deeply carved with numerous small figures at various pursuits on a rocky mountainside below clouds, one side with the boys entertaining a dragon with musical instruments beneath pine and other trees, natural split, base missing, also other minor damage, 24.5cm The Hundred Boys is a popular Chinese subject and lends itself to the imagination of the painter, sculpture or craftsman, for example a scroll by Leng Mei (fl.1700-1742) from the Yongzheng Period was with Sotheby’s Hong Kong 9 October 2012, Lot 3008. No other Zitan brush pot of this importance seems to be recorded. The carving of numerous small figures – often Buddhist monks, or families – on a rocky mountainside is familiar from Canton carving of ivory card cases, fan guards and boxes. The monastery of Tiantai Shan in Zhejiang Province in the Sir Victor Sassoon Collection, illustrated in ‘Chinese Ivories, The Shang to the Qing’, OCS 1984, pl.269 reflects the idiom. Another mountain, this carved in bamboo, is illustrated in ‘Chinese Bamboo Carving’, HK1978, no. 195 and a closer parallel is with a brush pot in the same book, no. 76, dated to the late 18th century. 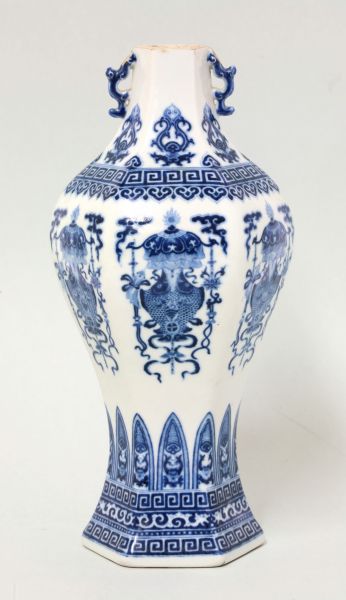 The booming Chinese art market was evident as a damaged and restored vase, from the Qianlong period, attracted the attention of buyers from around the world. With its hexagonal pear form, the body depicted groups of the Eight Babao under a canopy. The bidding started at £5,000 and simply kept climbing to £56,000 before going to an internet bidder based in China.

Another work of art from the Qianlong period performed beyond expectations. This time, it was a mirror with three Chinese poems written on the back, Set in an attractive wooden frame with lotus and scrolling foliage, the mirror retained an intimately decorative quality with several people taking time to take a closer look. The lot was won by a phone bidder for £20,000.

As for the Japanese section, good works of cloisonne continues to be in demand. A pair of cloisonne vases, measuring at 18cm tall realised a surprise £30,000.