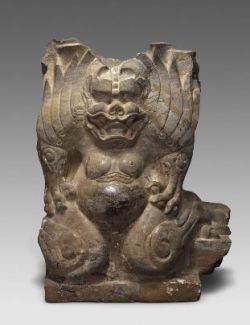 The Institute for the Study of the Ancient World at New York University (ISAW) presents a major exhibition that explores the Buddhist cave temples of Xiangtangshan (shahng-tahng-shahn), the crowning cultural achievement of the sixth-century Northern Qi dynasty (550–77 CE). Carved into the mountains of northern China, the temples were once home to a magnificent array of sculptures—monumental Buddhas, divine attendant figures, and crouching monsters framed by floral motifs. These statues are among the finest embodiments of Chinese Buddhist sculpture and are seminal to our understanding of the history of Chinese Buddhist style and iconography.

The artistic excellence of individual sculptures from Xiangtangshan has long been recognized, but their original context in the caves was lost when the objects were removed in the early twentieth century. Recent research and technologies have made it possible to digitally envision some of the caves as they appeared before they were despoiled. Echoes of the Past brings twelve of the surviving sculptures from the complex together with digital components—including an immersive re-creation of one of the largest temples—to bring the cave temples to life.

The exhibition can be seen at the Institute for the Study of the Ancient World at New York University 15 East 84th Street, New York City, from September 11, 2012–January 6, 2013. More information can be obtained at the website at www.nyu.edu/isaw.