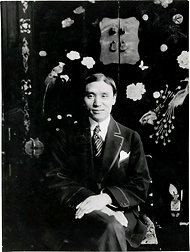 The Chinese art dealer C. T. Loo held court at his galleries in Paris, New York, Shanghai and Beijing. From the 1910s through the 1940s, he spoke mysteriously of his “friends” who could acquire artifacts in the countryside, while he angled spotlights on stone Buddha heads and opalescent jade bowls for sale.

He won over customers as elite as Morgans and Rockefellers and institutions including the Metropolitan Museum of Art and the Museum of Fine Arts, Boston. He plied buyers with his own exhibition catalogs and helped them to publish volumes about their holdings.

He promised secrecy about their purchases. “I am reserving them for you: I will not speak or send photos to anyone unless I hear from you,” he wrote to a Museum of Fine Arts curator in 1922, while persuading the institution to spend about $25,000 on a sixth-century limestone stele crawling with Buddhist deities.

A fraction of this dealer’s own research material has ended up at Christie’s in New York for a sale on Thursday, “In Pursuit of Knowledge: Asian Art Reference Books Including Selections From the C. T. Loo Library.” Estimates are mostly under $1,000 for batches of books that cover paintings, bronzes, ceramics and stone and jade carvings belonging to Chinese emperors and European and American aristocrats.

The volumes also document tombs and temples, some of which Loo was accused of looting during his career. In fact, Loo, who died in 1957, is still controversial in China.

“Most Chinese have very negative opinions about him,” said Daisy Yiyou Wang, a Chinese art specialist at the Freer/Sackler museum in Washington, who wrote her dissertation on Loo. Material that he handled, like frescoes, temple statues and freshly excavated bronzes, is now difficult to export legally.

But Loo argued that the Chinese government was not protecting its ancient sites, and the artifacts were safer elsewhere. Western collectors, he wrote in a 1931 essay, were “preserving relics of the past for the aesthetic appreciation and scientific study of posterity.”

Because of his fascinating contradictions, Ms. Wang said, “the picture is very complex.” She has interviewed Loo’s descendants, and recently learned that he had planned to market his wares on the Titanic’s maiden voyage, but he ran late at a port and narrowly missed boarding.

The family has sold his Paris gallery building in the Eighth Arrondissement, a 1920s red pagoda lined in lacquer panels. It has been restored and reopens on Oct. 12 as the Pagoda Paris gallery, with a show juxtaposing contemporary Asian art and vintage textiles. Auction previews and exhibitions will eventually be held there.

Jacqueline Baroness von Hammerstein-Loxten, the Pagoda’s director, said in a recent telephone interview that she hugely admired Loo’s ability to interest Westerners in Asian culture. With verve and showmanship, he wedged his pagoda between staid mansards. “In a very conservative district in Paris, it was something unheard-of,” she said.

The bulk of his library remains at the Pagoda Paris. (The Christie’s lots had belonged to a successor at his gallery, Frank Caro.) Loo’s books, correspondence and photographs will be accessible at the Pagoda by appointment.

Objects with Loo provenance are coming on view in New York in the next few days. Sotheby’s and Christie’s are offering bronze, ceramic and jade vessels that he handled. An exhibition opens on Tuesday at New York University’s Institute for the Study of the Ancient World. The show, “Echoes of the Past: The Buddhist Cave Temples of Xiangtangshan,” has sixth-century statues and fragments that he distributed after they were torn out of archaeological sites in northern China.