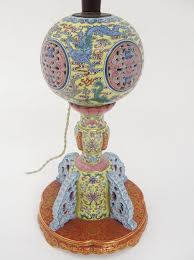 Cash is Qing: Antique wig stand made for Chinese emperor but used as a reading lamp for 50 years sells for £100,000

Porcelain stand went for more than 100 times the estimate of £800.

It was found in elderly man’s basement after his father bought it at fair.

None of the family knew what it was worth until the pensioner decided to downsize and asked experts to visit his home and value his possessions.

A wig stand that has been used as a reading lamp for 50 years has sold for almost £100,000 after it turned out to be a rare antique from the 19th century. 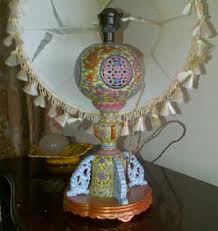 The porcelain stand went for more than 100 times the £800 estimate after experts realised it was made in imperial China for an emperor of the Qing dynasty.

The elderly owner, from North Wales, had no idea what the antique was worth and had balanced it on a windowsill to use as a reading light for the past 50 years.

The man, aged in his 80s, called auctioneers to his three-bed bungalow in Rhos-on-Sea, North Wales, to value some of his belongings because he wanted to downsize.

Expert Adam Partridge spotted the 11ins stand in the corner of the living room and then noticed the mark on the bottom that dated it between 1820 and 1850.

The pensioner, who has not been named, had been given the stand by his father who bought it at a country house sale in 1953.

The vendor fed an electric cable through a hole already in it and installed a lightbulb socket base before topping it with a cream lampshade.

The auctioneers carefully dismantled the lamp using a spanner and turned it back into a wig stand before auctioning it off.

The hammer price was £80,000 pounds but with fees added, the total sum paid by an anonymous collector from China was £94,400.

Bill Forrest, of Adam Partridge Auctioneers of Macclesfield, Cheshire, said: ‘Adam was called out to do a valuation on some belongings as the vendor was looking to downsize, when he spotted the wig stand and realised it was very rare.

‘It had been bought by the owner’s father at a country house sale in 1953 and has been used as a lamp ever since.

‘Luckily, because there is a hole in the top of the stand the owner was able to put a cable through to make it into a lamp without damaging it.

‘There is a dragon design on the stand which has five claws, which is a sign that it is made from imperial porcelain.

‘It is likely to have been owned by Emperor Daoguang because the mark underneath marks his reign and because of the colour, yellow was reserved for the emperor.

‘The owner was surprised but calm when we told him it was exceptionally rare and might be valuable.

We deliberately gave it a low estimate so not to put people off. The price rose from the start price of £1,000 to the hammer price of £80,000 in minutes. It was bought by a Chinese bidder over the phone.

The owner was in the auction at the time and seemed quite shell shocked at the result and needed a sit down. The stand is very rare. I have only ever seen one other example like this which was in a museum