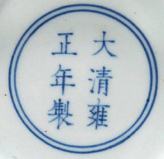 Chinese ceramics often have a reign mark on the base indicating the date the object was made. They can be made up of four to six Chinese characters, in kaishu (normal script) or zhuanshu (archaic seal script). Zhuanshu was developed from bronze inscriptions and stylized into a form of calligraphy. The first two characters of six character reign marks consist of the name of the dynasty, for example Da Qing (Great Qing) followed by the name with which the period was made, for example Kangxi (after the Kangxi emperor) and finally nian zhi (period made). When four characters are used, the title of the dynasty is omitted, e.g Kangxi nian zhi.