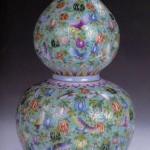 An Italian bidder offered a cool $1.7 million for what he thought was an 18th Century Famille Rose double gourd vase at Altair Auctions & Appraisals in Boston, US. Such bids are normally reserved for elite auction houses such as Sotheby’s and Christie’s, but it seems that the sale has stirred some controversy in the art world.

A local Boston newspaper received an anonymous tip, claiming that the vase bore a striking similarity to a 20th Century replica that was sold for just $3,840 in May 2012. It has come to light that the vase is almost certainly the same one, however it seems that sometime between the previous and the new sale, someone managed to forge it’s ownership history, perhaps to fool any potential new buyer about its humble origin.

James Jackson, the Iowa-based auctioneer who originally sold the reproduction vase on May 23rd 2012, claims that: “You could tell from looking at it that the vase did not predate the 20th Century. It didn’t require an expert. It would be like putting a Mercedes-Benz hood ornament on a VW Beetle.” 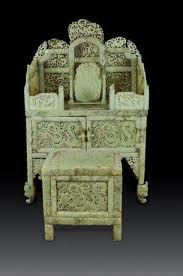 ART experts and historians are questioning the authenticity of a jade dressing table and stool said to date from the Han Dynasty (206BC-AD220) that were sold for hundreds of millions of yuan at auction in China last year.

The authenticity of the pieces was questioned because Chinese were thought to have sat on the floor, not on stools or chairs, during the Han Dynasty, academics say.

The set was sold by Beijing Zhongjia International Auctions, whose Web site describes the 138kg dressing table and 35kg stool as being from the Han Dynasty.

A Chinese bronze vessel at the British Museum, once thought to be three thousand years old, is likely to be a fake, according to investigation by the museum’s own scientists. But rather than proving worthless, the bronze vessel remains valuable as an artefact from a later – but still antique – period when reproduction of ancient vessels was a popular craft.

The bronze object was originally sold to the British Museum by the well-known collector George Eumorfopoulos in 1935. Like many such objects, it had passed between different art dealers and collectors.

Without any archaeological evidence to go by, the only sign of its origin was its appearance, including an inscription with the symbols “祖癸父丁”meaning “grandfather gui and father Ding” – that was typical for the Zhou Dynasty (1027-256 BC). 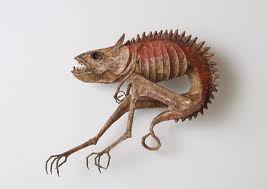 Fake fossils are duping scientists and museums, a senior paleontologist has warned, after a scholar was forced to retract a controversial essay that stated the cheetah originated in China.

According to Li Chun, associate researcher at the Institute of Vertebrate Paleontology and Paleoanthropology under the Chinese Academy of Sciences, counterfeits are now widespread and have become a serious risk to genuine study projects.

Let’s be clear on one thing right off the bat: I am not simple or naive. I am a professional, I speak multiple languages and I have a graduate degree.

However, when someone cold-called me from Shenzhen offering to share their buried treasure, I made multiple trips across the border to see for myself and came close to giving these people a lot of money.

I was sitting in the office last month when a stranger called from the mainland on my phone. He explained that he and his crew were doing some digging at a construction site and they had unearthed a tomb, containing treasure. 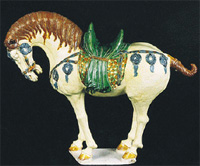 Thermoluminescence tests revealed that this ceramic horse, supposedly from the T’ang dynasty (617-908 AD), was a fake.

The base and the underside of the horse are made from genuine pieces of porcelain from the period, but the saddle, neck and tail are more recent.

40 per cent of objects tested by the Thermoluminescence Laboratories are proven to be fakes; half the antiquities brought for sale at Sotheby’s are fake; 5,000 forgeries of ancient art enter the market each year. To overcome the handicap of TL dating forgers expose sample to radiation. Difficulty is however the homogeneous distribution of natural radioactivity versus external exposure. Efficient exposure can be done only with γsources, external β exposure would only increase TL from surface material of sample due to the short range of β radiation. TL tests indeed indicate that several fake porcelain pieces have been artificially β radiated to produce TL signature. 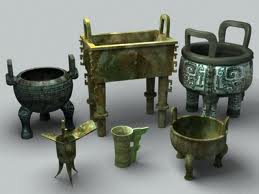 It was believed that Chinese civilization developed in the Central Plains area of the Yellow River. In the last 50 years, however, major excavation have been undertaken in Sichuan, Shaanxi, Shanxi, Hebei, Shandong, Henan, Chongqing and Hubei, areas thought to be primitive and devoid of historical context. Our understanding of Chinese history and its contributions to the Bronze Age was fundamentally changed with recent discoveries. In China, the Bronze Age was assumed to have started around 1900 BC, although the earliest dated bronze objects in China are from approximately 3000 BC, similar to the time Greece began using bronze. For comparison, the pre-Columbian civilizations of the Americas had bronze technology in 1000 AD. 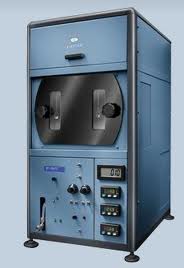 Scientists at The University of Manchester have developed a new way of dating archaeological objects – using fire and water to unlock their ‘internal clocks’.

The simple method promises to be as significant a technique for dating ceramic materials as radiocarbon dating has become for organic materials such as bone or wood.

A team from The University of Manchester and The University of Edinburgh has discovered a new technique which they call ‘rehydroxylation dating’ that can be used on fired clay ceramics like bricks, tile and pottery.

Working with The Museum of London, the team has been able to date brick samples from Roman, medieval and modern periods with remarkable accuracy.

They have established that their technique can be used to determine the age of objects up to 2,000 years old – but believe it has the potential to be used to date objects around 10,000 years old.