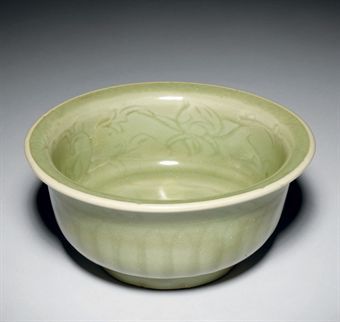 Celadon ceramics are a type of pottery produced in ancient China. This unique porcelain required relatively high firing temperatures, which called for kilns with sophisticated designs and excellent temperature-retaining characteristics, as well as suitable fuel to generate sufficient heat. Secondly, mastery of selection of porcelain-quality clay and the production and application of high temperature glaze was required.

One cannot discuss Celadon without mentioning the special ‘dragon kilns’ in which Celadon wares were produced. According to archaeological findings, this type of kiln first appeared during the Warring States Period (475-221 BC) in the city of Zeng in the Guangdong Province. Later, there was the East Han Dynasty dragon kiln in the Shanglu area of Zhejiang Province, which is better known today.

The design of the kiln was likely to have been a development of the rising-heat kiln, which consisted of a fire chamber linked to the kiln compartment. The top of the dragon kiln was sealed and the kiln was tilted; the lower end was the fire chamber and a smoke vent was located at the highest position. The kiln was constructed against mountain slopes; its shape hinted at the mythical animal, the dragon. The advantages of the dragon kiln were its ability to increase and decrease temperature rapidly, and to reach and maintain a reducing atmosphere.

The dragon kiln of the East Han Dynasty could reach a maturing temperature of over 1200° C; the porcelain produced had a glaze that was even and free from cracks. The glaze was light-green in colour and the body was white and refined. The thinner parts of the body were translucent and the glaze was tightly bonded with the body. In some abandoned kiln sites, fine pieces of green porcelain, or Celadon were discovered.

This new breed of porcelain grew rapidly, as the making of celadon during the third to sixth centuries AD became the fastest growing handicraft business in China; it was soon to become the new school of art that was to span across all of China. The southern style Celadon wares were produced mainly in Zhejiang, Jiangsu, Jiangxi, Hunan, Anhui, Sichuan, Hubei, and other southern provinces. In the north, the production of Celadon was the dominant product of the Chinese porcelain industry.

Celadon porcelain of the time was highly praised by the Chinese, as well as neighbouring countries of Korea, Japan and parts of South-east Asia. The quality and aesthetics of the wares were particularly suited to the Chinese taste, with the jade-like colour and body of Celadon porcelain. Since ancient times, the Chinese have adored jade. According to their culture, jade is the epitome of beauty, infused with the essence of the sun and moon, and is considered to be the medium of the spiritual world. Jade items were ceremonial objects, as well as charms worn by emperors and nobility. However, for the common people, jade was a rare item and was extremely difficult to craft so people sought jade-like beauty in celadon, which had very similar colour and lustre to jade.

The province of Zhejiang, which produced large volumes of Celadon, has been viewed as the place of origin of Celadon porcelain. Looking back at its history, the prestigious Celadon kilns of the Tang Dynasty included Yue, Wuzhou, Ou and Deqing kilns. By the Song Dynasty, there were new developments in Celadon-making, with important kilns being the Longquan kilns, Yaozhou kilns, and the kilns of the city of Jingdezhen.