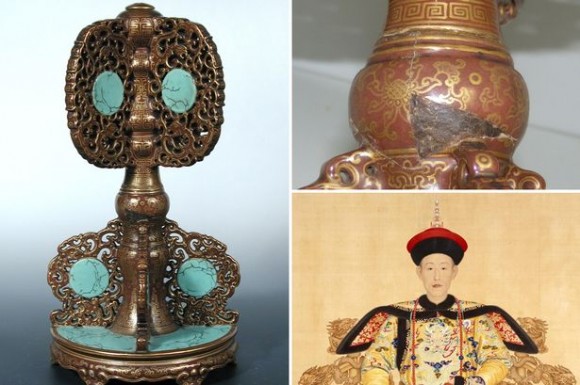 The damaged porcelain stand had spent years dumped in a utility room in Cambridgeshire but was made in the 18th century for the Emperor Qianlong. The 11 inch tall item had previously been split in two and crudely glued back together again. It also has several chips in it.

It was found by experts stored away in a utility room having been placed there by the British owner who had inherited it from a great uncle.

It had been expected to make £10,000 at auction but there was so much interest in it from Chinese collectors that the bidding took off.

The seller, a man aged in his 50s, attended the sale and was said to be ‘bouncing off the walls’ at the end of it. The ornate, porcelain wig stand was made in the 18th century for the Emperor Qianlong and has his seal mark on the bottom.

It has six ornate feet supporting a gilt bronze circular base and a rotating lid where scents were placed to make the hairpiece smell nice. It was brought back to Britain from China about 80 years by the great uncle of the vendor, who is from the Cambridge area.

George Archdale, an associate partner of auctioneers Cheffins of Cambridge which sold the stand, said: “The seller had stored it in his utility room. “It was kept out of the way and was rather ignored and unloved. “It had previously been broken in half at some stage and glued back together. It wasn’t a professional repair and not terribly well done.

“But the bidding just kept going up and up. The vendor was bouncing off the walls and went away with a spring in his step.

“Three hundred and sixty thousands pounds is a lot of money for anybody.

“Obviously we are delighted with the outcome.

“When things like this happen it encourages people to think about items they might have and get them looked at.”

The sale is another example of how strong the market is for ancient Oriental artefacts, with the newly-rich Chinese buying back their lost heritage. Experts say that the sale of wig stand shows even damaged pieces can command huge sums.