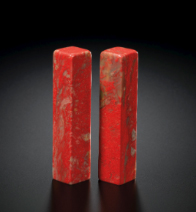 One of the most valued materials in China, ‘chicken-blood’ soapstone is considered a protection from evil and is believed to be even more powerful than jade. As red is traditionally considered symbolic of good luck, soapstone of this colour was gifted on occasions of marriage, birthdays, promotions and success.

The name derives from its bright red colour which resembles chicken blood, which is composed of eight basic colours which blend or combine in different layers: red, black, white, yellow, green, blue, grey and purple. The stone is a finegrained mixture of clay and quartz with varying amounts of red cinnabar.

Because both compounds are very soft and the colour of cinnabar darkens when exposed to sunlight, this stone cannot be worn in jewellery and is thus reserved for seals and ornamental objects. Moreover, as the hardness of its ingredients vary from 2 to 7 in hardness and cinnabar has the potential to be extremely toxic if not handled correctly, it is a very difficult material to work with.

Soapstone of this tone is only found in two locations in China, Changhua and Balinyouqi.