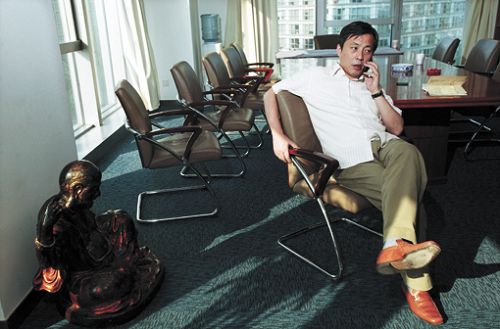 Liu Yiqian, 51, is one of the country’s wealthiest people and among a new class of Chinese super-rich scouring the globe for artwork.

A middle-school dropout who drove a cab before becoming a multimillionaire, Liu has a fortune estimated at US$900 million by Forbes, making him the 200th richest person on China’s mainland.

Born in 1963 into a working-class family in Shanghai, Liu left school at age 14 to help his mother with her handbag business. He worked as a taxi driver for two years in the mid-1980s, before making his fortune in the 1990s by investing in the stock market.

With two museums to his name, Liu made headlines in the art world when he bought a Song-era scroll for US$8.2 million at a Sotheby’s auction in New York in September — only to have it dismissed as a fake by a trio of renowned experts.

Liu stands by the scroll’s authenticity.

Talking about the “chicken cup,” Liu said yesterday: “It was deemed as a legendary item and could be appreciated only in books in the porcelain collection circle. It can be called either destiny or fortune that I buy it today.”

He told art website artron.net that it is hard to judge a quality art piece by time and price.

“I feel fortunate to buy it at the current price,” he said.

Liu said the cup will go on display at his Long Museum in Shanghai before the end of the year.

“I’m expecting everyone to come and have a look.”