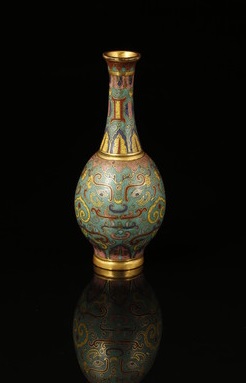 Duke’s up & coming Asian art sale released press article: One of the most interesting objects is a miniature cloisonné enamel vase. It has the all-important six-character reign mark of the Emperor Qianlong who ruled China from 1735-1796. Under his reign the arts reached the pinnacle of achievement and items from this period are highly prized.

The really interesting thing about this vase is that it has a single character mark underneath the reign mark. Several similar items have appeared on the market over the years but no auctioneers have been able to identify the meaning of these curious single marks. Now Duke’s have decoded the mystery. 🙁

“I just had a strong sense that these single marks must mean something, and I suspected that this had something to do with their placement within the Imperial Palace”, said Duke’s Asian Art specialist Andrew Marlborough.

“So I asked our Chinese translator to look into it and what she found was both wonderful and fascinating. She found an article by a Chinese scholar which had clearly never been published in the West.”

Apparently, triple sets of miniature cloisonné items were made specifically during the reign of the Qianlong Emperor, and each of these sets bears a different single character mark, along with the Imperial reign mark. These single marks were all taken from The Thousand Character Classic, a poem containing 1000 different characters which was used from the 6th century onwards in China to teach children. It is what we would call an alphabet song. Each of the sets was placed at a different place within the Palace complex and the mark used would have indicated where it was to be placed. “It is so exciting to make this discovery”, continued Andrew, “and great fun too that an ancient alphabet song has proven the key to decoding the mystery of these miniature cloisonné enamel artworks.”

“The quality of this vase is jewel-like” added Andrew, “and the design on the body is of a smiling face, adding further appeal”. The sale contains not one but two of these miniature vases. Both have been consigned from a local Somerset private collection and were thought to have been acquired prior to World War II. They measure just 5 inches high and have pre-sale estimates of £5,000 – 10,000 but the auctioneers are hopeful that they will surpass this level. The auction, which is on Thursday 22nd May, contains other interesting Imperial Chinese items, including a jade dish made in the Jiaqing reign which is expected to fetch £30,000 – 50,000

(Irv) Dukes have decoded nothing as there is nothing to decode, the marks are know & common knowledge within the trade:

(Irv) Note that the additional inscription seen on some Qing cloisonné enamel pieces may appear as a single number between one and five or as an obscure character defining the vessel’s usage and category. The extra character is also seen on some imperial glass wares and believed by some scholars to be a serial number from the Chinese classic Qianziwen, ‘The One Thousand Word Essay’, with a strong connection to the Imperial Workshops. The single charachter mark along with the Qianlong mark is not as rare as the article above suggests, similar pieces to the vase above regularly come onto the market and fetch around $30,000