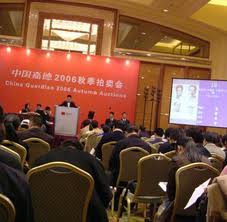 International auction houses Sotheby’s and Christie’s have a history that stretches back to the 18th Century.

But a little-known Chinese rival could now pose a threat to their global dominance of the sale of fine art and antiques.

China Guardian said last week that it would hold its first auction outside mainland China in Hong Kong on October 7.

Although the sale will be conducted in Mandarin Chinese, Yannan Wang, China Guardian’s president and director, said the company hoped to target overseas customers.

Future auctions will be held in both English and Mandarin.

“We have a very strong base of Chinese collectors and some loyal Western buyers,” she said in an emailed response to questions.

Deadbeat art buyers on the rise in China

China’s art market has boomed in recent years as the country’s newly affluent look to collect their own art and heritage.

China Guardian has been holding sales in mainland China since 1994 and according to French auction body Conseil des Ventes now ranks as world’s fourth largest.

The Hong Kong auction, which will feature ink paintings, calligraphy and classical Chinese furniture, marks the first time a Chinese auction house will compete with Sotheby’s and Christie’s on their home turf.