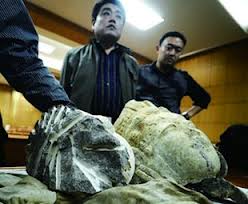 Police on Monday said they have recovered a pair of priceless 1,400-year-old stone Buddha heads from relics thieves in east China’s Shandong Province.

The heads were removed from Buddha statues in a mountain cave in the city of Jinan on Sept. 18. Police arrested two suspects and found the stolen relics in the Shandong home of one of the suspects in October, local officials said.

China, with a 5,000-year civilization, holds abundant cultural relics. But the government’s protection of them has been under increasing public scrutiny in recent years, especially after the Palace Museum in Beijing suffered a string of incidents involving the theft and damage of relics.

Earlier this year, a man was sentenced to 13 years in jail and fined 2,000 U.S. dollars for breaking into the heavily guarded Palace Museum, also known as the Forbidden City — the former imperial court — and stealing nine pieces of art made of gold and jewels in May 2011