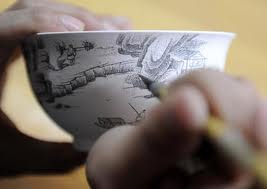 China’s porcelain production center of Jingdezhen in Jiangxi province is losing its status as the country’s largest porcelain base to Chaozhou, Guangdong province.

Jingdezhen was one of the 24 historical and cultural cites designated by the State Council in 1982, and the only one on the list for traditional Chinese craftsmanship in porcelain.

In 2006, the city’s porcelain craftsmanship was named by the State Council as China’s intangible cultural heritage.

However, the ceramics industry in the city suffered when local authorities decided in 1995 to close the city’s 10 debt-ridden state ceramic factories. Tens of thousands of ceramics workers lost their jobs, as the 10 factories accounted for 80% of the porcelain produced in the city.

Many jobless porcelain workers started their own workshops to earn a living. However, most of these workshops were small in size and could neither design new products, nor produce them on an economic scale to drive down costs.

Huang Xuanhua, a master craftsman in his 60s, was a former painter at the now-defunct Jingdezhen Artistic Porcelain Factory. He remembers that there were more than 3,000 painters at the factory.

“We worked together and competed against each other with the finest works, which brought out the best in us.”

Only 500 of them remain in the trade now, eking out a precarious existence, said Huang, at his workshop. Few of them took the trouble to create new patterns for their products.

Jingdezhen was known for producing replicas of high-quality antique Chinese porcelain. However, the replicas were then sold by crafty merchants at exorbitant prices as genuine antiques, tarnishing the image of the city and turning the porcelain capital into a fake antique capital.

In April, 2004, the China Ceramics Industrial Association designated Chaozhou as the country’s new porcelain capital, since it was the largest producer of daily porcelain products and bathroom fittings in China.

Chaozhou houses more than 10,000 ceramics factories, which constitute a complete production chain. They employ over 200,000 workers and mass produce porcelains to decrease cost.

The new capital, though, has its own problems. Many factories were founded by porcelain workers, who do not possess modern management skills. Many factories are run by families and suffer shortages of workers.