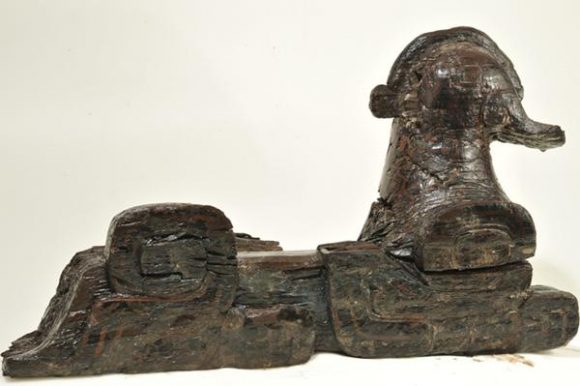 A painted frame of a se with circular carved phoenix head and painted vertical scale patterns on part of the body is excavated in Guojiamiao cemetery.[Photo/kaogu.cn]

Chinese archaeologists have selected the top 10 archaeological discoveries in China of 2015, with the earliest dating back to the Paleolithic era.

The following is the list made public by the China Archaeological Society and a newspaper sponsored by the State Administration of Cultural Heritage on Monday:

1. Evidence of fire-use found in Gantangjing in southwest China’s Yunnan Province that dates back to the Paleolithic era.

3. A large water project dating back about 5,000 years was found on the outskirts of Hangzhou, capital of east China’s Zhejiang Province. It is the oldest water system of such a size ever found in China.

4. Excavation of Neolithic remains in southeastern coastal areas of Hainan Province offered valuable insight into the study of the environment and people’s means of survival during the period.

5. Building foundations, chariot pits, a tomb complex and a drainage system at the Zhouyuan site, ruins from the Western Zhou dynasty (1046-771 BC) in northwest China’s Shaanxi Province, are invaluable for the study of the Zhouyuan civilization.

6. Altogether 135 tombs were unearthed in the Tonglushan bronze smelter site in Daye City in central China’s Hubei province, showing the site’s complete mining and metallurgy chain for the first time.

7. Discovery of the 2,000-year-old burial site of Haihunhou, the Marquis of Haihun, in Nanchang in east China’s Jiangxi Province. It is the best preserved tomb from the Western Han Period (206 BC-24 AD) ever found in China.

8. Thorough excavation of the Taiji Hall in central China’s Henan Province has helped establish the scale, range, structure and chronology of the imperial palace hall of Luoyang City during the Han Dynasty (206 BC-220 AD) and the Wei Kingdom (220-265).

9. Excavation of a royal Liao Dynasty (916-1125 AD) tomb in north China’s Inner Mongolia, offered clues in the study of the dynasty’s family tree.

10. Excavation of a sunken warship from the First Sino-Japanese War (1894-1895) in waters off Dandong in northeast China’s Liaoning Province, provided precious material for the study of China’s modern history and the war.

China has listed its top 10 archaeological findings every year since 1990.