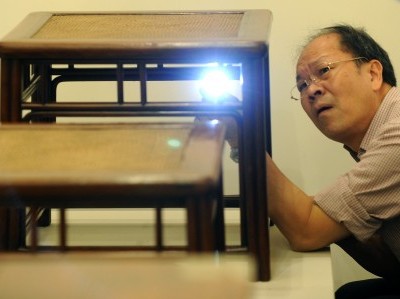 When in 1388, during the first years of the Ming dynasty, Cao Zhao, an author from the Yangtze city of Songjiang, published the Ge Gu Yao Lun (Essential Criteria of Antiquities), he had no idea that 600 years later, his advice to collectors would be the litmus test of a multibillion-dollar industry in 21st-century China.

In essence, what Cao explains is that a concern for authenticity should dominate all other concerns such as aestheticism when it comes to artefacts. The fear of fakes, forgeries and inauthenticity was prevalent in 14th-century China. As the international art press and business media has mentioned at length, these fears are present again today as Chinese auction houses aim for the international market.

In less than 10 years, China has become the world’s second-largest auction market, accounting for 24 per cent of international auction revenues. Poly Culture Group – whose IPO on the Hong Kong stock exchange in February raised US$331 million – is the leader in this fast-growing market, with sales of US$1.3 billion in 2013, which positions the company as the third-largest auction house globally.

Noticeably, Poly Culture’s main international competitors who still lead the global ranking, Christie’s and Sotheby’s, have built their reputation and success on trust since they were founded in London more than two centuries ago. In the aftermath of the French Revolution in the 18th century, London was flooded with works of art, turning it into a global art hub at the expense of Paris. Since that time, the two auction houses have consistently been involved in the greatest auctions of artworks and collections.

Trust derived from unparalleled expertise defines the auctioneers’ business model: an artefact selected by their experts and sold at one of their auctions worldwide immediately gains a label of quality and provenance among collectors.

If Chinese auction houses want to successfully aim for a bigger share of the international art market, they will need to achieve the same level of trust.

Artefacts which are by definition heterogeneous, non-income producing assets are difficult to assess and value. Auctioneers are expert in qualifying artworks’ unique characteristics as well as market conditions that will eventually affect their selling prices, preferably as high as possible.

However, the art market can only grow and sustainably prosper if there are transparent guidelines to define authenticity and protect long-term trust between buyers and sellers.

The issue of fakes affecting makers of luxury goods is well reported and vehemently combated by Western authorities. Notwithstanding their high prices, luxury goods are utilitarian consumer goods.

Artefacts are in a different league altogether.

They might be commoditised in a merchant economy, but what they convey is a priceless message about the greatness of human achievement. Their value cannot be reduced to their price. Condoning art forgery is a crime against one’s culture, one’s forefathers and, ultimately, one’s country.

China is still struggling to foster its image as a producer of high-quality goods. Letting the market for Chinese classical artefacts thrive with nagging doubts about authenticity and forgeries in the background would make a mockery of its ancestral tradition of scholar collectors and its incredible artistic achievements, admired worldwide for centuries.

Because of the country’s prestigious heritage, the art market is arguably the foremost realm where fakes should not be tolerated. China is no longer the feudal middle kingdom of yore. How could such a magnificent and rich heritage be trivialised to the point that the very values of connoisseurship and authenticity embodied by antique artefacts are lost in search of an elusive golden calf?

Fortunately, with Chinese auction houses’ global ambitions and a few admirable modern-day scholar collectors who greatly treasure their heritage, there might be hope for Cao Zhao’s collecting ethos.