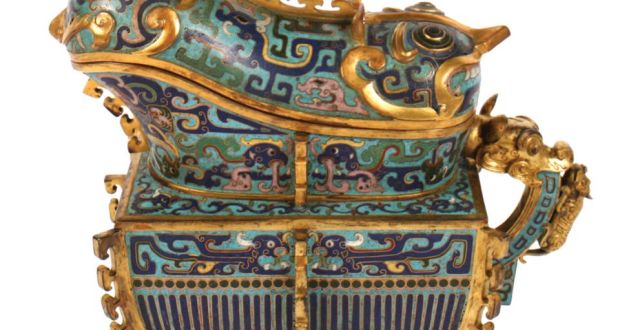 Sheppard’s had another stroke of Chinese good fortune this week as the Durrow, Co Laois auctioneers held its first auction since last month’s cancelled sale of the Jackie Kennedy letters.

On Tuesday morning, the three-day event got off to a dramatic start when an antique Chinese cloisonné (enamelled) bronze guang – a type of decorative ewer used for pouring rice wine at ritual banquets – sold for €250,000, 10 times the estimate (€20,000-€30,000).

The guang measures just 38cm high. The buyer was an antiques dealer bidding by telephone from London. The result is the latest example of Chinese antiques, which are notoriously difficult to value, fetching enormous sums at auction.

In November 2012, Sheppard’s sold a matchbox-size white jade seal, used to stamp documents in imperial China. It had a top pre-sale estimate of €6,000 but sold on the day for €630,000. That was a record price for an item of decorative art sold at auction in Ireland.

In February this year, a blue-and- white 18th-century “bottle vase”, made in China during the reign of the Emperor Qianlong, made €170,000, more than 60 times the estimate.