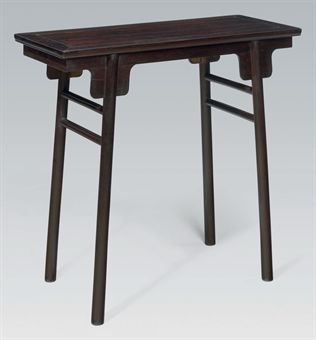 First records of Chinese furniture were found among excavated material in the form of stone engravings and stamped bricks dating back to 1500 to 1000 BC. These relics depict people using  small furniture such as low tables, screens and armrests for sitting cross-legged on mats and kneeling.

Some early examples of excavated lacquer furniture circa 500 BC, show a preference for unadorned simplicity and minimalism. Other examples from the same era show intricate carvings and use unique colour patterns as decoration. The themes of form and function are a persistent pattern throughout the long lineage of Chinese furniture.

The shift towards high seating was incited by foreign influences and a radical shift towards Buddhism in Chinese culture around 200 AD.

In the 2nd Century AD, the Han Emperor Ling was recorded to have a fascination with foreign objects, including the “Barbarian Seat” which refers to a folding stool used by one of the nomadic tribes of the remote western and northern regions. These stools, which were also used for mounting horses, were very portable and quickly became popular seats for travellers and hunters.

With the early arrival of Buddhism, many aspects of Chinese culture were affected, this also includes furniture. The ideas of enlightenment were linked with being raised off the ground, in the same way that Buddha sat on a platform rather than just a ground mat. Since then, the platform seat has been adopted as a seat of honour for special guests, officials and dignitaries. Han Dynasty records from 206 BC – 220 AD indicate that these platforms were called ta; the longer versions of these platforms resembled benches and were called chuang. These were used for both sitting and reclining.

The eastward migration of Buddhism from India meant that chairs and raised platforms started to appear with increasing frequency. The high seats denoted high status and were frequently used to enhance the image of educators or great masters, as well as the tradition of being surrounded by disciples who normally sat on lower stools.

Distinctively hour-glass shaped, rattan-like stools made of straw and basketwork started to appear during the Northern and Southern Dynasties around 386-585 AD. Similarly styled chairs can still be found around parts of modern China.

Soon after the introduction of sitting platforms, the raised platform also began to function as a large mid-height dining table.

By the beginning of the Tang Dynasty from 618 – 907 AD, chairs and stools had become common pieces of furniture for the elite and people of rank. Early models of the yoke back and round back chair are depicted in contemporary paintings and wall murals.

With the Northern and Southern Song periods (960 – 1279 AD), wooden furnishings had become prevalent among all ranks of society with many types of high furniture available, including backed chairs, stools, tables and benches. While the majority of people could afford only simple functional designs, the elite tended to own more ornamental and intricate styles of furniture. These include waisted corner-leg furniture, which was more elegant and inspired by early Scythian and Greek architecture.

The basic styles and formed developed during the Song period continued to evolve and develop through the Yuan and Ming periods into more curved and robust forms that were finished off with smooth, thick lacquer coatings and finely detailed and colourful decorations

After the lift on the import ban in 1567, during the early Qing period, there was an abundance of furniture in the minimalist classical style produced from tropical hardwood. The use of these hard, dense woods created great advancements in joinery techniques which were previously impossible with softer wood. The furniture of the time was elegant and at the same time understated which made it popular with the tastes of the scholarly and the officials. The style also became popular with the newly-rich merchant class of the time.

With the fall of the Ming Dynasty in 1644, China came once more under the rule of the Qing Emperors. While the early Qing furniture makers preferred classic patterns, there was a notable shift towards more refinement in terms of decoration. This was a reflection of Emperor Qianlong’s great interest in classic Chinese arts which by extension affected the furniture styles. The result saw more angular furniture forms which were often generously adorned with traditional decoration.