The tomb of a general and his princess wife buried on March 18, in the year 564, has been discovered in China.

The princess was the daughter of the Cong Ming King from the Northern Qi Dynasty, which existed for just 27 years and was one of the shortest and mysterious dynasties in Chinese history.

The ancient tomb, which contained the couple’s skeletons, was also filled with figurines.

Apart from the remains of the couple, 80 exquisite coloured figurines have also been found inside their tomb chamber.

A sandstone inscription found in the tomb describes the life of the couple Zhao Xin and his wife, Princess Neé Liu. The inscription says (in translation), “On the 20th day of the second moon of the third year of the Heqing period [a date researchers said corresponds to March 18, 564], they were buried together.”

Zhao was the son of the leader of a local tribe and was born with a general title, according to the inscription, which was written in ancient Chinese.

The man was born with a general title and was promoted three times in his life. When he died at the age of 67, he was the general of a garrison of solders at Huangniu Town, leading some 5,000 soldiers.

The man’s presence could ‘command a hundred cities and scare off 10,000 men’, said the inscription.

As a reward to his loyal service, Zhao was given three more titles after he had passed away, including the Jiabiaoqi Great General and the local executive of Chanshan County.

Of Princess Neé Liu, the inscription says that “by nature, she was modest and humble, and sincerity and filial piety were her roots. Her accommodating nature was clear, her behavior respectful and chaste.” 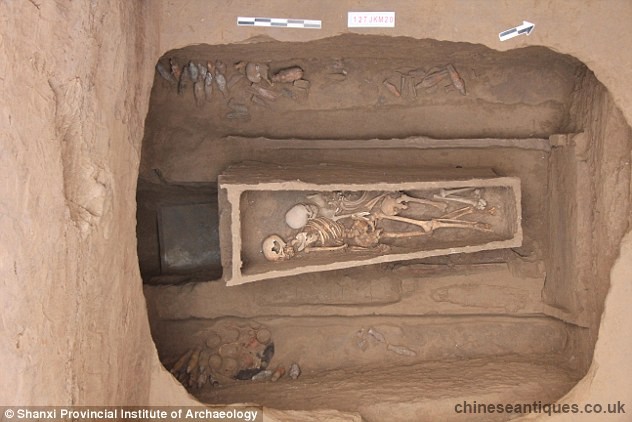 Zhao Xin died at the age of 67 while still general of the garrison, according to the inscription, which does not indicate why he and his wife were buried at the same time. A detailed analysis of the bones hasn’t been published yet.
Mountain roots

Archaeologists said in the journal article that the tomb is located near modern-day Taiyuan city on the “eastern foothills of the Xishan Mountains, on the west bank of the Fenhe River.”

And, while little is known about the nature of the deaths, the researchers say the mountainous site chosen for the burial of Zhao Xin and Princess Neé Liu may have been of symbolic value.

‘If the mountain peak’s roots are firm, it can contend in height with Heaven and Earth,’ the inscription says.