Reign marks can play a pivotal role in helping to identify the period in which Chinese artefacts were created. Reign marks are usually four or six characters in length and can be found on the base or the side of an item.

To read a reign mark, it is important to understand how they are written.

Usually, the mark will consist of six characters and will be stamped, painted or etched into two columns. The mark should be read from top to bottom, and from right to left – not the traditional, western approach of left to right. Experts believe that this tradition began with Chinese artisans writing on long, thin strips of bone or bamboo.

Some reign marks can be made of up two or three horizontal lines of six or four characters. All marks will still be read from the right to the left.

A Chinese six character reign mark will break down in the following way:

Characters 3 and 4 represent the name of the Emperor.

Characters 5 and 6 (Nian Zhi) loosely translate as, “made for”. This ties in with characters 3 and 4.

For example, the six-character reign mark shown reads: Da Qing Yongzheng Nian Zhi, translating as ‘Made in the Great Qing dynasty during the reign of the Emperor Yongzheng’ (1723-1735).

The Origin of Reign Marks

Reign marks were in common usage at the beginning of the Ming dynasty (1368-1644) and continued throughout the subsequent Qing dynasty (1644-1911). 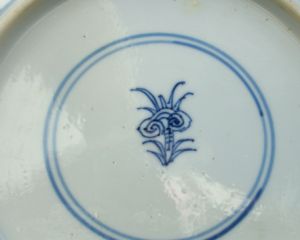 Although reign marks were used into the 20th Century, there was a short period that they were forbidden to be used. In 1667, the Kangxi Emperor issued an edict that banned the use of reign marks that bore his name. This was a precaution, in case delicate porcelain was broken or discarded, so potters painted a precious or an auspicious object within two double circles such as a Jui, lingzi, rabbit or ruyi head. Alternatively the two double circles were left blank.

During the time of the Yongzheng Emperor (1723 – 1735), seal-form reigns mark became popular. These can also be found on 19th and 20th Century Chinese porcelains. This style of marking is known as zhuanshu script, whereas the more traditional character reign marks are called kaishu script.

The Writing of Chinese Reign Marks

Let’s elaborate a little more on the difference between kaishu and zhuanshu script.

Kaishu script dates as far back as the Sui dynasty, which began in 581 AD. Kaishu script is what most of us think of when we picture Chinese characters.

Zhuanshu, meanwhile, looks more angular in style. Zhuanshu is actually older than kaishu, dating back to the Shang dynasty of 1500 – 1028 BC. Zhuanshu underwent a resurgence in popularity during the 18th Century.

Regardless of the script, reign marks are usually applied in one of two ways. An underglaze mark of cobalt blue is common. If this is not the case, an enamel reign mark will appear over the glaze. These could have been impressed or incised, and the colour palette could include paler shades of blue, black or iron red.

Where to Find a Chinese Reign Mark

The first place to look for a reign mark on a Chinese piece of porcelain is the bottom of the item. If you do not see a reign mark here, check the mouth of the item, or the exterior of the base.

Reign marks should help to date and value a Chinese artefact. Unfortunately, forgeries have been produced that include reign marks to fool collectors.

To understand if a piece is genuine you need to consider the quality of the workmanship. If a piece was made for an Emperor, everything about it should be flawless – including the reign mark. A hasty, faded or poorly applied reign mark is an immediate red flag.

Not all poor-quality reign marks are forgeries, however. This rule only applies if the piece was made for imperial use. Many Chinese artefacts were designed for use by the general populace. These are called, “minyao”, which translates as, “the ware of the people.”

Ceramics made especially for the Emperor are, “guanyao”, or, “official ware.” As you can imagine, minyao was not subjected to the same exacting standards. The quality differences between minyao and guanyao pieces are quite easy to spot, especially once you have a core understanding of reign marks and an overall feel for Chinese pieces.

Some reign marks will not match the workmanship and materials of the era they claim to represent. While this will raise suspicion, not all pieces with a later, copied reign mark are forgeries.

As China has a long and illustrious history of ceramic production, artisans would include reign marks from earlier periods. This was a mark of respect to pay tribute to bygone emperors. When viewing pieces at auction, these marks will be listed as apocryphal.

Reign marks from the time of the Chenghua Emperor (1465 – 1487) were particularly popular during the reign of the Kangxi Emperor in the 17th and 18th Centuries. The Chenghua Emperor was even more exacting in his standards than most. Any porcelain with the slightest imperfection was not permitted for use in the imperial household and destroyed on sight. As a result, artefacts from this era are very rare. The craftsmanship of anything that survived the cull has always been held in the highest possible regard.

The Xuande Emperor, who reigned between 1425 and 1435, also oversaw a golden age in Chinese art – though this involved metals, not porcelain. This era is considered to be the peak of bronze art in China. Many sculptures carved from bronze during the 17th and 18th Centuries bear the mark of the Xuande era, especially bronze censers. Again, this is a tribute to the skilled artisans of the past.

Any expert in Chinese antiques will be able to explain more about reign marks – including how to read them, and how to tell which are genuine.