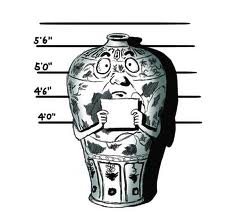 Porcelain is one of the great inventions of ancient China. The production of ceramics began 8000 years ago, since when numerous famous kilns have flourished. A particularly interesting development occurred between the end of the Yuan dynasty and the beginning of the Ming dynasty. At that time, in response to demand, a concerted attempt was made by the kilns to reproduce the ceramic wares of the past. The popularity of imitations may have arisen out of a veneration for antiquity, or from a love of the craftsmanship involved, or just because the kilns had an eye for a potentially profitable venture. Huge quantities of reproductions were made in the Ming dynasty and afterwards in three notable periods of growth: during the reigns of the Qing emperors Kangxi, Yongzheng and Qianlong; in the late Qing dynasty; and after the 1980s. The reproductions were of many kinds, some of which were such excellent copies that they were indistinguishable from the originals, thus posing considerable difficulty in authentication by today’s researchers and experts.

Reproduction Porcelain In The Reigns Of Kangxi, Yongzheng And Qianlong, Qing Dynasty

During the reigns of the Qing emperors Kangxi, Yongzheng and Qianlong, ceramics production reached a peak of technological development. The manufacture of reproduction wares similarly thrived. Much of the quality of the ceramics produced at this time may be attributed to Tang Ying, the official in charge of the imperial kilns under emperors Yongzheng and Qianlong. Not only did he have an unmatched grasp of the technical processes involved, but also Tang Ying was also able to make the organisation of production more efficient. Under his supervision, innovations in technology, glazes and patterns were introduced, and superb porcelain was created.

Reproduction wares were also made in many varieties and palettes, including blue and white, red underglaze, wucai (polychrome), doucai (contending color), red glaze, blue glaze, yellow glaze, white glaze, ruyou (Ruyao kiln glaze), guanyou (Guanyao kiln glaze), geyou (Geyao kiln glaze), dingyou (Dingyao kiln glaze), junyou (Junyao kiln glaze), and longquanyou (Longquan kiln glaze). Some of these wares were exact copies of those from the famous kilns of the previous dynasties, others combined imitation with innovation. All of them were of the finest quality, displaying the vividness and diversity of color, shape and pattern achieved by the crafstmen of the day.

Reproductions From The Late Qing Dynasty To The Republican Period

In the declining years of the Qing dynasty, as the imperial collection of porcelain was gradually broken up and dispersed, trading in antiques developed. To satisfy demand and increase revenues, some antique dealers began manufacturing reproductions themselves. In the main they copied the porcelain made by the imperial kilns during the reigns of emperors Kangxi and Qianlong, such as blue-and-white porcelain; five-colored, tricolor-glazed and kidney-bean red porcelain; and porcelain decorated in the peacock green and eggplant purple first developed in the reign of Emperor Kangxi; they also made replicas of the porcelain decorated in blue and white, pastels, doucai and sacrificial red produced in the reign of Emperor Qianlong. In addition, there were reproductions of the Junyao kiln ware of the Yuan dynasty, of blue-and-white bowls from the reign of Ming Emperor Hongwu, and of blue-and-white cups from the reign of Ming Emperor Yongle. Among these, the most distinctive reproductions were of the larger wares.

The trade in antiques continued to flourish in the republican period. It comprised not only reproductions of porcelain from the distant past but also that of later vintages, ranging from such prized wares as celadon from the Six Dynasties period to imperial porcelain from the reign of Emperor Guangxu in the late Qing dynasty. Some of the best replicas were celadon imitating that produced in the Longquan kiln in the Song dynasty; blue-and-white porcelain imitating that of the reign of Emperor Xuande in the Ming dynasty, as well as a rich palette of glazes including rouge red, Langyao kiln red, kidney-bean red, light greenish blue, all of which were copies of the most distinctive ceramics produced in the reigns of emperors Kangxi, Yongzheng and Qianlong.