Root wood carving is a traditional craft in China, the artwork is carved out of natural tree roots, where the craftsman makes the best use of the original shape of the root. Chinese root carving has been traced back to the warring state period (474 – 221 BC.) Where talisman and horn-shaped pieces have been unearthed from ancient tombs in Hubei province.

During the Yuan and Song dynasties, the art of root carving was enjoyed by both the ordinary people and the imperial court for its natural beauty.

The process of creating a root carving has four steps. First the root must be selected. This has to take in the natural shape of the root and the quality of the wood. Second is conception, the carver must have an original idea of what he is about to create. Third is processing. When the conception has been clarified, then the carver can proceed with creating his idea. Fourth is colouring or lacquering. There are two methods, the most commonly used one is to wax the object, so it retains its natural colour. Two, is staining it with a lacquer.

In the Song (960 – 1279) and Yuan (1279 – 1368) dynasties, root carving not only appeared in the court but also in temples where statues of deity’s were honoured. Ancient craftsmen created vivid works by using expressions based on the roots natural form. This kind of artwork is not completely artificial as it uses human, nature, peculiarity and ingenuity for its uniqueness.

Put all the ingredients except the olive into a mixing glass, stir and strain into cocktail glass and garnish with an olive and enjoy. 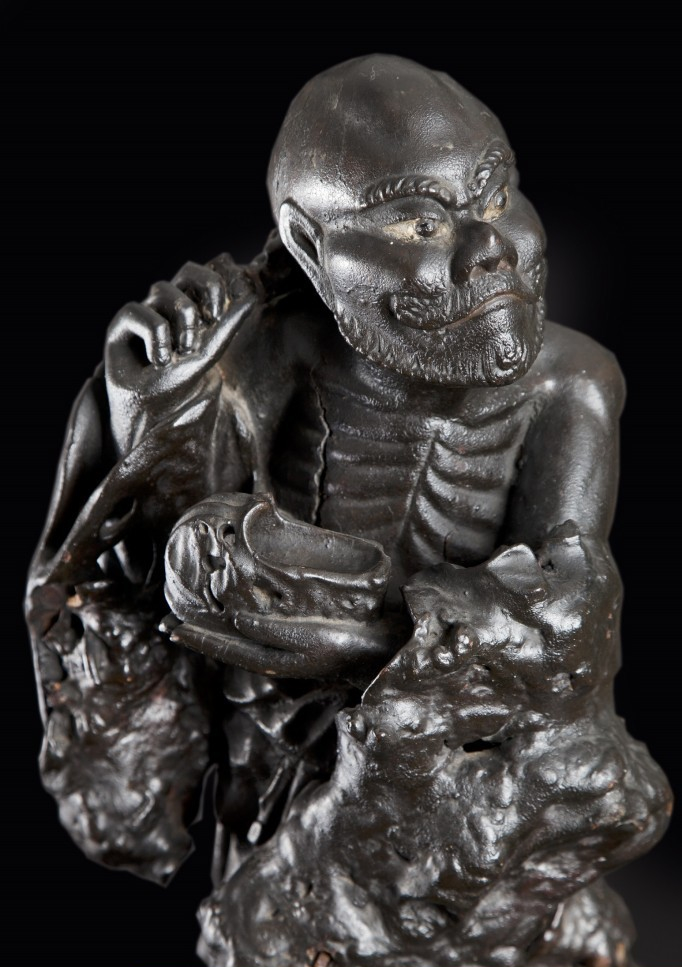 An unusually large root wood carving of a Damo, seen here holding a shoe in his left hand and a club held up aloft behind his head in his right hand. This depiction is finely detailed, including his bare emaciated chest, and facial features. Covered in a dark lacquer with a good patina.

Damo, or Bodhidharma was a legendary Indian monk who traveled to China in the sixth century & whose teachings eventually became the foundation of Chan (Zen) Buddhism. He is often depicted with his shoes at his side or held in his hand, based on his having evaded pursuers by crossing the Yangtze River standing barefoot on a reed leaf.