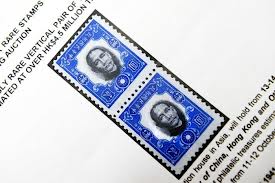 A pair of rare stamps bearing a picture of Chinese nationalist leader Sun Yat-sen have sold for more than $700,000 at auction in Hong Kong.

Zurich Asia says the price has set a new “world record for any Republic of China stamp”, referring to the period of 1912 to 1949 in China, after the last imperial dynasty lost power and before the communists took over.

With the distinctively inverted central portraits of Dr. Sun Yat Sen, this  offering is amongst the rarest and most valuable items of Chinese philately. It is one of the only two surviving multiples from the original sheet of 50 stamps with this error.

In March 2012, an inverted Dr. Sun stamp was sold for over HK$2.4 million at Zurich Asia, setting the world auction record for any Republic of China stamps. The present lot – in pristine condition with the light penciled initials of stamp expert Peter Holcombe on the reverse of each stamp and full original gum – is expected to arouse even stronger interest from discerning worldwide collectors and set another new auction record.