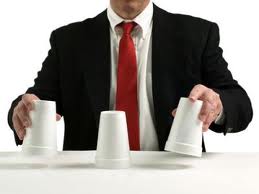 Read The Article – Now Apply It To The Current Chinese Antique Market.

Things should become a little clearer.

At their prestigious evening sales in New York earlier this month, the three main auction houses—Christie’s, Sotheby’s and Phillips de Pury—sold off an impressive $633m worth of contemporary art. There were many record prices and only a few lots failed to sell. Evidently the super-rich have a lot of cash and see art as an attractive investment.

The auction houses are also helping to boost the market and reduce volatility through a nifty trick called a “third-party guarantee” or “irrevocable bid”, through which they sell a work before the auction for a minimum price. This becomes the “reserve” below which the artwork will not sell. The guarantee gives the seller the confidence to consign a work and other potential bidders the reassurance that there is somebody out there willing to buy it. However, these financial agreements are secret and riddled with potential conflicts of interest. Many dealers, such as David Nash, a partner in Mitchell-Innes & Nash, argue that they distort the free market.

Auction houses have themselves been offering guarantees since the early 1970s to encourage collectors to sell their artworks. In autumn 2008, however, Christie’s and Sotheby’s had to pay out at least $200m on works for which they had guaranteed a minimum price but which failed to sell when the market turned. Now the main houses prefer third parties to take on this financial risk.

The first guarantee funded by a third party is believed to date back to November 1999, when Sotheby’s found a backer to pledge $40m for Pablo Picasso’s “Seated Woman in a Garden”, which had been consigned by Eleanore Saidenberg, Picasso’s long-time American dealer, and her husband, Daniel. From 2000 onward, both houses have been working with outside financiers—often cash-rich dealers such as Bill Acquavella, Bob Mnuchin, David Nahmad and Adam Lindemann, who know a lot about the distinct markets of individual artists. There are also an estimated 30-40 collectors who provide guarantees, such as Si Newhouse of Conde Nast magazines, Steve Cohen, founder of SAC Capital, Pierre Chen, owner of the high-tech Taiwanese Yageo Corporation, and the Qatari royal family.

Very little is publicly known about how these agreements are constructed. In September 2008 Sotheby’s began publishing small symbols in their auction catalogues, which distinguished between the lots guaranteed by Sotheby’s itself and those backed by third parties. Christie’s followed suit a month later. Yet the identity of the guarantors and the level of their commitment remain confidential.

One controversy revolves around the way third-party guarantors earn “financing fees” at the two main houses. At Christie’s guarantors earn a fee whether they end up buying the work or not; at Sotheby’s the fee is only paid if the guarantor does not in the end acquire the artwork.  The stakes are high and can earn a guarantor several million dollars on a single lot. The differences between the way Sotheby’s and Christie’s structure their financing deals are significant, and can affect the way guarantors approach doing business with each auction house. 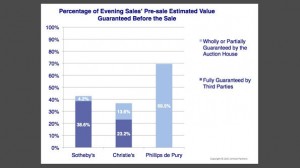 It is strongly believed, for example, that Guy Bennett, an art advisor acting on behalf of the Qataris, negotiated third-party guarantees on the top lots at both Christie’s and Sotheby’s recent contemporary auctions in New York. During the prestigious evening sale at Christie’s on November 8th, Mr Bennett was seen to make the winning bid of $38.5m for Roy Lichtenstein’s 1961 painting, “I can see the whole room!… and There’s Nobody in it!”. Christie’s normal buyer’s premium (or commission) on this would bring the final price up to $43.2m, which was the price reported by Christie’s. However, high-powered guarantors often negotiate a 50-50 split with the auction house of as much as 30% of the overage (the amount generated above the guaranteed price) and an additional 50% of the buyer’s premium. The market believes the Lichtenstein was guaranteed at $35m. If Mr Bennett, who bought the picture, had negotiated such a deal, the real price he paid would have been $40.3m.

Christie’s clearly states in the back of its catalogues that “remuneration may be netted against the final purchase price” of an artwork, but many people don’t fully understand what this means. Of course, the other bidders on the same work did not take the risk of guaranteeing the work in advance of the sale; the less well-connected are not offered the opportunity. As one collector admits, “The playing field is not level, which is why I like doing third-party deals with Christie’s. If I end up being the owner, I effectively get a discount even if it is not called that.”

Sotheby’s has been speaking out against this opaque, convoluted practice, alluding to Christie’s particular way of working. Bill Ruprecht, Sotheby’s chief executive, recently went on the record to say: “I can assure clients they are bidding in a fair, transparent, and level playing field. I could not offer those assurances elsewhere.” But exactly how level is “level”?

Up and down Madison Avenue dealers were gossiping before the sales about how the Qataris had anonymously guaranteed three Clyfford Still paintings in Sotheby’s evening sale for a total of $50m (the sum of the three low estimates). Well-informed insiders believe that the Arab royals bought the first and third of the Still lots (pictured) for $61.7m and $19.7m respectively, bidding on the telephone through a Sotheby’s director, Lisa Dennison. The second Still painting, the price of which climbed well above its low estimate of $15m, was knocked down at $28m ($31.4m with premium) to a different telephone bidder. Sotheby’s only pays financing fees to guarantors who ultimately do not purchase the works they are guaranteeing. Thus, if the Qataris did indeed guarantee all three pictures on a basis of a 50-50 split of 30% of the upside (the sum over the guaranteed price, assumed to be the low estimate) and half the buyer’s premium, the financing fee earned on the picture they did not buy would have come to at least $3.65m, an effective discount on the other two paintings.

So Sotheby’s playing field is not so much level; it simply requires that a guarantor or his advisor play the game differently. Marc Porter, Chairman of Christie’s Americas, responds to Mr Ruprecht. He warns against the “moral hazard of an incentive structure” that rewards the guarantor only if someone else buys the artwork.

Dealers and collectors become guarantors for various reasons besides the financing fee. They may want to own a specific masterpiece or have vast holdings of an artist’s work and thus a vested interest in high prices. They may also be keen on what one third-party backer described as “relationship building” with the auction houses, which gives them access to privileged information, such as the reserve on a work of art, the supposedly confidential price under which a work will not sell.

Good auctions are theatrical spectacles that create the illusion of deep markets. Historically a successful sale needs at least two bidders. But sometimes a guarantee leads to a “private sale in public” in which the guarantor is the only bidder. When the top prices for a particular artist are only reached via these kinds of behind-the-scenes, one-to-one transactions, it is reasonable to ask whether it is indicative of a market at all.

No one wants to ruin the entertainment value of a night out at the auctions, but contemporary art has enough credibility problems without unnecessary murkiness. “Industry practices need to catch up with the value of art today”, argue Michael Plummer and Jeff Rabin of Artvest Partners, a firm of art-investment advisors. “We need to require a higher standard of transparency and ethical behaviour because so much money is at stake.” Regardless of the money involved, the market would be considerably fairer and more open if the auction houses reported real prices, disclosed the reserve prices—and named the third-party guarantors as well.