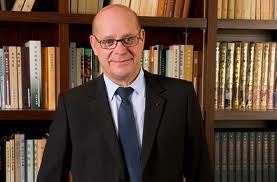 Like a benign Buddha, Christian Deydier sits in the upstairs library of his Parisian gallery, cradling a cup of Chinese tea. Shaven-headed and softly-spoken, Deydier fits neatly into the serene tone of the place, with its books on oriental art ranged on dark wood shelves, while ancient bronzes and early ceramics are spot-lit on pedestals.

He is the top French dealer in ancient Chinese art, but also the power behind the Biennale des Antiquaires, the French trade’s two-yearly, high-glamour art-and-antiques fair which opens this Thursday in the prestigious surroundings of the Grand Palais.

It is not an easy role. Deydier has a lot of challenges to face, not least dealing with the quarrelsome, 400-odd members of the Syndicat National des Antiquaires, the organiser of the fair and perhaps not the most modern organisation in the world. He juggles budget of €10m, every sou of which is carefully watched by its 17-member committee. He is in charge of a fair that is being forced to reassess its relevance in today’s market, as the number of collectors for traditional antiques shrinks.

And this year he has the additional challenge of holding the fair in the midst of the ongoing euro crisis, while France’s new socialist regime threatens a new tax level of 75 per cent on the highest income bracket, plus a hike in the wealth tax.

Softly spoken he may be, but Deydier is steely underneath. “He’s autocratic and high-handed,” says one player on the Parisian scene. “Don’t be fooled by the velvet glove. But he’s also extremely dynamic and has a great carnet d’adresses.”

“There is something of the warrior in him,” says a close acquaintance. “He’s not afraid to say what he thinks – and he has a volcanic temper! But he is also pragmatic – in some ways he’s more like an American businessman than a French antique dealer.”

Deydier’s background led him almost inevitably into Asian art. He was born in Laos to a French museum curator of Indian art, who died when he was just four years old. “But my grandfather was a specialist in orientalist books, my godmother was a curator at the Cernuschi museum of Asian art, so I grew up in this world,” he says. “I initially studied maths and physics and wanted to join Nasa, but the call of Asia was too strong.”

So he continued with a degree in Chinese language and civilisation in Paris before working at a Taiwanese university on jiaguwen – oracle bone script, the earliest form of Chinese writing.

He has cultivated powerful friendships, notably with France’s ex-presidents Chirac and Sarkozy. At the same time, there is a practical, down-to-earth side to him, probably inherited from his maternal ancestors. He is passionate about haute cuisine, working in the Ritz hotel kitchens when he can – “which isn’t often at the moment,” he laughs.

So how did he become an antique dealer? “Everything was an accident,” he explains: “I started working for the Chinese art specialist Jean-Claude Moreau-Gobard; he was going to retire, but then didn’t. But through him I met the London specialist Giuseppe Eskenazi, who encouraged me to come to London. So I started a gallery there, in 1987, and then opened in Paris 10 years later.”

Now he is an Officier de la Légion d’Honneur as well as being a Commandeur du Mérite National.

He was president of the Syndicat between 2002 and 2008 and then voted out – but brought back in 2010 after the difficult period of the financial crisis, when his determination and dirigisme became more appealing.

“There was a great debate at the time about making the Biennale annual, which I opposed,” he says. “Of course the great strength of the fair is also its weakness, in that it is held only every two years, which means people can forget about it – but also allows exhibitors the time to find the very best pieces to show. And the money just wouldn’t be there to stage such a splashy event every year.”

Deydier has been tireless in promoting this year’s event, indefatigably jetting around the world to meet collectors and encourage them to attend.

“I’ve been to Singapore, Hong Kong, China, Turkey, Russia, Abu Dhabi, among others. I exploded the advertising budget!” he says.

This he reckons at about €2.5m, with the Biennale costing some €8m-€10m in total. “But the budget is balanced,” he says. “The Syndicat funds the fair from the income of stand rentals, entry tickets – we get 80,000-100,000 visitors for every edition – and advertising in the catalogue.”

But he says that taking everything into account, including the exhibitors’ own expenses, the total cost of the Biennale is probably around an eye-popping €70m.

He has also driven forward an ambitious series of television programmes, Portraits d’Antiquaires, presenting individual dealers and their specialities and broadcast in 14 languages on France’s TV5. “I’ve done all I can, now it’s up to them,” he says of the dealers’ prospects at the fair.

One issue that he has had to address is that of the Haute Joaillerie, the group of 10 top jewellers – Cartier, Chaumet, Boucheron and so on – who used to be grouped in a single block in the centre of the event.

“It is important to have these exhibitors, because they bring in incredibly wealthy clients, but they have their own infrastructure. They fetch their clients directly from their hotel, take them into the jewellery section, and the clients just stay there, and never see the rest of the fair.

“So I have separated these jewellers into three zones at each end of the Biennale, which means that their clients will have to walk through the fair. The jewellers didn’t like it, but I told them take it or leave it,” he says.

The most difficult issue he has to face is the shift in taste. French 18th-century antiques, once the raison d’être of the fair, are just not sexy any more, and indeed there are fewer and fewer dealers in this sector.

Deydier is clear: “We have to adapt. No one wants those bourgeois apartments filled with classic furniture any more – c’est chiant. All the other fairs are adapting. If we stuck to 18th-century furniture we would be dead. But there are other periods – there will be 19th-century and even early 20th-century pieces, for instance, with Carpenters’ Workshop.”

And while the Biennale is not the place to see contemporary art, he says that living artists such as Manolo Valdès or Pierre Soulages are “grands classiques” and have their place in the fair today.

Deydier himself has always produced spectacular pieces for the Biennale, and this year he promises to do the same. “Half of my stand will consist of Chinese pieces, and the other half is from Central Asia, and my centrepiece is a vase in silver gilt, from the fifth-sixth century. It’s from a private French collection and it took me months and months to get it, but you’ll see, it’s astonishing.”