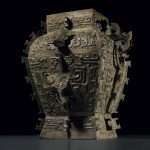 The auction of an antique Chinese bronze ritual wine vessel at Christie’s Asian Art Week in New York next week has caught the attention of well-heeled collectors across China.

The “Min” Fanglei, as the square bronze wine vessel from the 12th or 11th century BC is known, fetched a record US$9.2 million in its last appearance in March 2001 at Christie’s, when it was acquired by a French collector.

Along with a lid, the exquisite artefact, with its fine casting and inscription, is believed to have been unearthed in the early 1920s in the southern province of Hunan. However, the lid and the body of the vessel went to separate owners soon after its discovery, with the latter being taken out of China and featured in L’Art Chinois, published in 1928 by George Soulie De Morant. Over the years, the body of the vessel passed through the hands of some renowned dealers and collectors overseas. The lid, however, has been kept at the Hunan Provincial Museum since 1956.

There are different stories about how the vessel was excavated and even disagreement on whether the lid and body are one set. “I can assure you that the two are a set,” said Li Ye from the museum’s publicity office. But she did not want to say whether the museum would send experts to the auction next week to bid for the body of the bronze vessel and bring it back to China to make the set complete.

Ji, who used to work at the Shanghai Museum, also dismissed the suggestion that the lid and body were not one set. He recalled that when the director of the Shanghai Museum, Ma Chengyuan, visited Japan in the late 1980s and saw the body of the bronze vessel at the home of a Japanese collector, he felt that the two were one set. In 1992, the Japanese collector went to the Hunan museum and offered to build a well-equipped exhibition room and donate some ancient artefacts in exchange for the lid of the bronze vessel. But the proposal never came to fruition.

More than 60cm tall, the “Min” Fanglei is considered the largest vessel of its kind. The lid, with an equally exquisite design and casting, is more than 20cm tall. “There are probably only three similar bronze vessels in the world today but none has a lid. If joined by a lid, this artefact will be priceless,” said Ji.

He expects the bidding for the “Min” Fanglei at Christie’s next Thursday to go over US$20 million. Its lot number is a lucky 1888, perhaps to appeal to Chinese bidders. “But this is still not too high for deep-pocketed collectors who are after iconic artefacts,” he said.

The Chinese government has been involved in the purchase of ancient Chinese artefacts from overseas owners. In 2002, the State Cultural Heritage Administration set up a special fund and allocates 50 million yuan (HK$63 million) every year for museums to bring back cultural icons back from abroad. In 2006, the fund financed the purchase of the “Zi Long” Ding, the largest round bronze tripod known from the Shang dynasty, which has since been kept at the National Museum.

However, He Shuzhong, founder of the Beijing Cultural Heritage Protection Centre, does not think the “Min” Fanglei important enough to be bought using the special fund.;

Ji said: “The best result is to see it return to China and make the lid and body a complete set. But I fear the bidding will be very intense between buyers from China and overseas.”