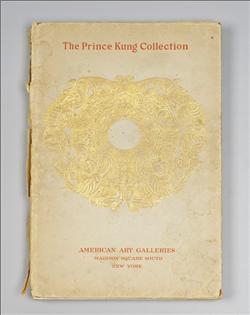 New York – On September 13, Christie’s is pleased to present In Pursuit of Knowledge: A Collection of Asian Art Reference Books including selections from the C.T. Loo Library. Comprising more than 120 books, periodicals, and catalogues, this sale presents a unique opportunity to acquire rare and important reference materials that are valuable tools for the study of Asian art and trace the history of collecting in the 20th century. With a focus on Chinese materials, the sale includes selections from private American libraries and is anchored by the working library of C.T. Loo.  Estimates range from $500-$15,000 and include rare exhibition and sale catalogues, important academic journals, out of print and additional references on the history of Chinese art, and other materials.

Recognized as one of the most influential figures in the international trade of Chinese art in the first half of the 20th century, C.T. Loo helped to develop knowledge and interest in Chinese art in America and Europe.  Born Loo Ching-Tsai in Zhejiang, China, C.T. Loo first established his business in Paris in the early 1900s, trading in tea, silk and works of art, eventually shifting his focus to Chinese antiquities and later expanding the business to New York.  As a respected dealer, collector, connoisseur, and patron of the arts, he organized several significant exhibitions and participated in major international exhibitions. He retired in 1950, leaving his business to his associate Frank Caro.  During his lifetime, he sold some of the most important pieces to come on the market, using the resources from this library to conduct his research.

Highlights of the sale include:

Illustrated Catalog of the Remarkable Collection of the Imperial Prince Kung of China, published in New York, 1913

Prince Gong (Kung in Wade-Giles Chinese) was the sixth son of the Daoguang Emperor (r. 1821-1850) and amassed an impressive collection of jade carvings, porcelain, and archaic bronzes. The collection was originally set be auctioned in London, causing a stir among collectors; however, the auction was cancelled when New York-based antiquities dealer Yamanaka & Co. brokered a deal to purchase the entire collection. Yamanaka & Co. subsequently auctioned the collection on 27-28 February – 1 March 1913 and produced this rare illustrated catalogue listing the property for sale (estimate: $4,000-6,000).

A Catalogue of Chinese Pottery and Porcelain in the Collection of Sir Percival David, 1934

Perhaps the most famous collection of Chinese ceramics catalogued by R.L. Hobson was that of Sir Percival David (1892-1964), whose collection was one of the finest and most influential in private hands. A Catalogue of Chinese Pottery and Porcelain in the Collection of Sir Percival David, was first published in 1934 and included 180 photographic plates and well-researched essays on the collection and the development of Chinese art from the beginning of the Ming dynasty (estimate: $8,000-10,000).

Catalogue of the International Exhibition of Chinese Art, 1935-1936

Amongst the most ambitious exhibitions of Chinese art ever assembled out of included Chinese works of art from royal, private, and national collections lent from countries all over the world including the United States, Sweden, Russia, Turkey, and China. The organization committee was headed by Sir Percival David, whose masterful diplomacy and organizational skills resulted in the unprecedented exhibition of Chinese works of art (estimate: $1,000-2,000).