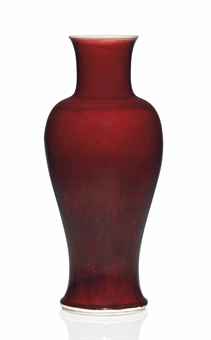 The tall powerfully shaped body rises to a waisted cylindrical neck. It is covered with a crackle-suffused glaze of deep crushed strawberry-red colour falling in a thick line above the unglazed foot and thinning to a pale tone below the white rim.
18 ¾ in. (47.5 cm.) high

The term langyao, ‘lang wares’ derives its name from Lang Tingji, director of the official kilns at Jingdezhen between 1705-1712, who is credited with the revival of monochrome glazes and particularly copper-red glazes.

The copper-red colour is often considered the most challenging to regulate during the firing process as exactly the right conditions are required within the kiln to achieve the rich tones demonstrated by the present lot. Although copper-red was used successfully in the Ming dynasty, particularly in the Xuande period, the copper-red monochrome glazes seen in the Qing dynasty became even more refined and were of an exceptionally even and vibrant tone. The fine glaze and elegant form of the present vase exemplifies the skill of the Chinese potters under Lang Tingji.