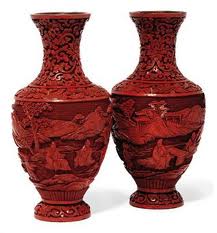 Cinnabar Lacquer pieces have a distinctive red colour combined with highly detailed carving. The origins of cinnabar lacquer-ware are lost in the mists of time, but are believed to date back as far as 2,300 years ago. In today’s market, the best available pieces are from the mid- to late-Qing dynasty period of the 18th and 19th centuries, although pieces from the 17th century occasionally appear at auction.

Earlier pieces, dating back as far as the 13th century, are only to be found in museums or private collections. Even those in museum collections are rarely seen because they are so light sensitive.

This highly coloured lacquer-ware often takes the form of jewellery, plates, boxes, or vessels such as jars and vases. Common motifs used in the carving include dragons, flowers, idealised landscapes and mythical birds.

Artisans created the coral red or pink colour of these pieces by adding cinnabar, a naturally occurring mercury ore, to the lacquer. The lacquer came from a type of Sumac tree native to China and was harvested in much the same way as rubber, by cutting the bark of the tree and collecting the sap.

Cinnabar lacquer-ware was made by painting thin layers of lacquer on to a base article usually made of bamboo, wood or metal. As many as 300 layers were applied in this painstaking and time-consuming process, with each layer being allowed to dry before the application of the next.

Often the pieces were finished with a final layer of pure lacquer to seal in the highly toxic mercury ore used in the process. Modern pieces sold as cinnabar lacquer ware use non-toxic pigments.

Once the lacquering was complete, skilled craftsmen carved intricate shapes into the pieces with sharp blades. This highly skilled process required pinpoint accuracy which can be seen in the exceptionally fine detailing of the pieces.