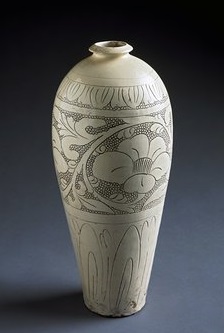 This bottle is an example of Cizhou ware, a type of ceramic made in the northern part of China during the Song dynasty (960-1279). The term Cizhou encapsulates a range of wares made in several regions of northern China, often consisting of a course stoneware body covered with a white slip (a thin layer of diluted firing clay), and then decorated with a contrasting colour.

Vessels of this shape have traditionally been referred to as meiping, literally ‘prunus vases’. However, some of these ‘prunus vases’ are inscribed with the Chinese words ‘fine wine’.

Cizhou wares were utilitarian at their time of production and were made in relatively large numbers.

This bottle is made in a shape known as meiping (prunus vase), but it was most likely used to store alcohol. Although they were not given high praise at the time of production, the bold designs and simple shapes of Cizhou wares were later treasured by Japanese and Western connoisseurs alike. The studio pottery movement in Britain found affinity with ceramics like this vase, which Bernard Leach praised in his seminal publication, A Potter’s Book, in 1940.